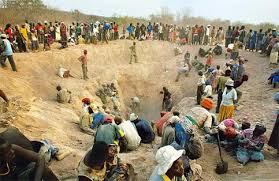 At Zimbabwe’s biggest diamond field, cattle that strayed through a sagging fence graze unattended near idled dump trucks and conveyors as police stop and check visitors’ vehicles for clearance.

Security forces and state-owned Zimbabwe Consolidated Diamond Co. on Feb. 22 took over the deposits in Marange, the biggest source of diamonds by volume in 2013, according to industry analyst Paul Zimnisky.

The seizure came as President Robert Mugabe said that illicit trade in the stones has cost the economy, which has halved in size since 2000 as farm seizures slashed crop exports, more than $13 billion.

The nation is the world’s biggest platinum producer after South Africa.

Zimbabwe, a $14 billion economy for which mining is the biggest source of foreign currency, first seized the fields from a U.K.-based company in 2006 and set up ventures with private companies to mine the gems. In 2014, the state announced plans to cut the number of Marange operators to one or two from seven after it said they failed to properly account for revenue.

“The government simply allowed these companies, the Chinese, and locals to do their own thing without proper structures,” John Robertson, an independent economist based in the capital Harare, said by phone.

Advocacy groups including Ontario-based Partnership Africa Canada accused Mugabe’s ruling party of facilitating the removal of about $2 billion in revenue from the fields, partly to fund the nation’s military. It denied this, citing the European Union’s lifting of sanctions on diamond exports in 2013 as evidence this wasn’t the case. Human Rights Watch in 2010 said Zimbabwean soldiers were smuggling gems across the border with Mozambique.

“What we want is clarity,” Mbada Chief Executive Officer Thomas Luciano said in an interview this month at the mine that’s about 400 kilometers (245 miles) southeast of the capital, Harare. Mbada was replacing equipment to boost production before the seizure and lost a March High Court bid to continue operating, he said.

The state has earned about $2 billion from the gems as the industry generated about $15 billion, Mugabe said in March, without saying where he got the information. Lawmakers visited Marange in late March “to find out what happened” to the unaccounted for production, parliamentary speaker Jacob Mudenda said April 5.

The government oversaw diamond processing and was therefore aware of the whereabouts of the gems, Luciano said. “Even during transportation, all our diamonds were monitored by the authorities,” he said.

Businesses in the Marange area, also known as Chiadzwa, are reeling from the slowdown. Two banks and a car dealership that used to operate at Hot Springs, the main shopping area for diamond miners, have shut down while other shop owners say trade has declined.

“The bank immediately took $3 million which was in our account because they didn’t know if we will be able to pay back the loan,” he said. “Everyone is after us, even the workers.”

The government moved families from Marange to Arda Transau, 140 kilometers north of Chiadzwa, to make way for the diamond mines in 2009. Six years later, the state and the companies have yet to fulfil their promises of jobs at the diamond mines and proper housing for the families, Manicaland Provincial Administrator Fungai Mbetsa said.

“In 2010, I was transferred here with all the promises one would get from diamond mining, ” he said. “Nobody believes that I am from Chiadzwa, because I have nothing.”