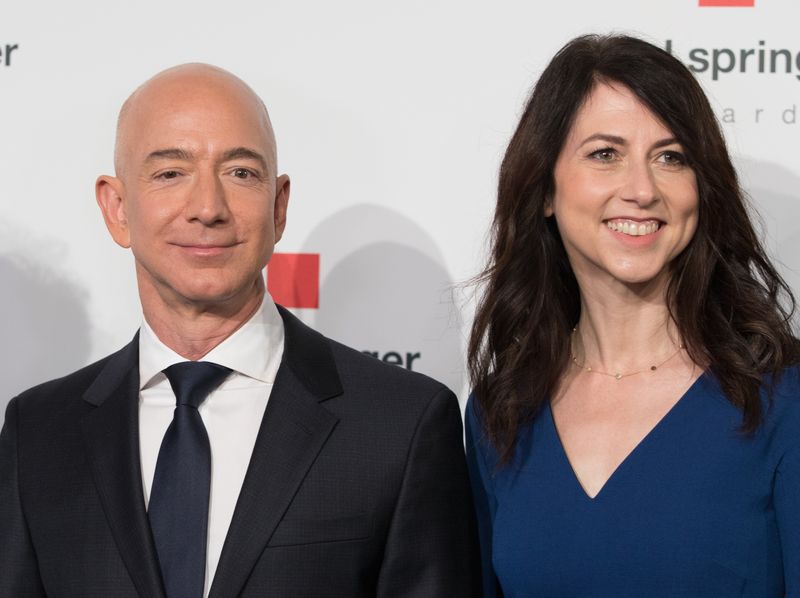 Homepage » World » World » With $137 Billion At Stake, Jeff and MacKenzie Bezos To Divorce

Amazon.com Inc. founder Jeff Bezos and his wife MacKenzie are divorcing after a relationship that started at a New York hedge fund and is ending a little more than a year after he became the world’s richest person.

“After a long period of loving exploration and trial separation, we have decided to divorce and continue our shared lives as friends,” the pair tweeted on Wednesday.

While Wall Street took the announcement in stride, investors will be watching to see if the divorce settlement affects Bezos’s control of Amazon. So long as the company is growing and returning profits, he’ll probably maintain their confidence, though a settlement could potentially put a dent in such Bezos side projects as the space exploration company Blue Origin.

The announcement came hours before the National Enquirer tabloid newspaper began tweeting that it planned to publish an expose about the split. The Enquirer and the New York Post later reported that Jeff Bezos has been having a relationship with Lauren Sanchez, a former TV anchor and helicopter pilot and the wife of Hollywood talent agent Patrick Whitesell. The New York Post said Sanchez and Whitesell are separated. MacKenzie Bezos was aware that her husband was dating Sanchez during their separation, according to a person close to Jeff Bezos, who asked not to be named discussing personal matters.

Jeff and MacKenzie Bezos met in New York at D.E. Shaw. Jeff was the first person to interview MacKenzie for a role at the hedge fund and the pair ended up having offices next to each other, according to a 2013 interview with Vogue. They married in 1993 and a year later drove across the country to Seattle, where Jeff founded Amazon. They have four children.

Bezos often discussed the bond with his wife and made the story of their marriage a foundation of his personal biography. He liked to say that as a single man he sought a partner who could “get him out of a third-world prison” and that MacKenzie fit the bill. At work, Bezos often lit up when discussing his wife and children.

MacKenzie, an author, played a significant role at the company in the early years and “was there when he wrote the business plan,” she wrote in a disparaging 2013 review of a Bezos biography written by Bloomberg Senior Executive Editor Brad Stone. “I worked with him and many others represented in the converted garage, the basement warehouse closet, the barbecue-scented offices, the Christmas-rush distribution centers, and the door-desk filled conference rooms in the early years of Amazon’s history.”

MacKenzie’s presence with the company faded in later years. Most high-ranking employees saw her at social events the couple hosted at their Medina home and elsewhere. They’d also be spotted at Lakeside, a Seattle private school, with their children. When Amazon showcased its new biospheres, the plant-filled architectural centerpiece of its Seattle headquarters, the couple toured the building with a horticulturist. MacKenzie also accompanied her husband to Hollywood events after Amazon began a concerted push into video and original programming.

After her husband became rich and famous, MacKenzie strove to retain her privacy, according to three people close to Bezos, who requested anonymity given the sensitive nature of the subject. MacKenzie’s primary influence on Bezos and Amazon was to provide encouragement in the early years and support through tumultuous times, one of the people said.

Bezos, 54, is worth $137 billion, according to the Bloomberg Billionaires Index, a ranking of the world’s 500 wealthiest people. He owns about 16 percent of the retailer as well as the Washington Post and Blue Origin.

“Jeff remains focused on and engaged in all aspects of Amazon,” Drew Herdener, a spokesman for the retailer, said in an emailed statement in response to a question about how the divorce might affect the company and its investors.

A divorce could reshape the global wealth ranking. If the couple split their fortune equally, it could leave MacKenzie, 48, with $69 billion, making her the world’s richest woman. It could also make Microsoft Corp. co-founder Bill Gates, currently worth $92.5 billion, the planet’s richest person once again. Bezos eclipsed Gates in October 2017.

The state of Washington — where Amazon is based and the couple have a home — is a community property state, which means all property and debt acquired during a marriage “will be divided equitably by the court if the couple cannot negotiate an agreement,” according to the website of McKinley Irvin, a family law firm in the region.

There is no set formula in Washington law as to how assets should be split, said Jennifer Payseno, a partner with McKinley Irvin in Seattle who handles high-net worth divorce cases for the firm. Wealthy couples often agree how to divide their assets before bringing the matter to a judge, and those details are often filed confidentially with the court.

“My guess is they’ve probably have already worked up some sort of framework, and that’s why they’re announcing it now,” Payseno said of the Bezoses. “It’s not going to be made public.”

Washington state also mandates a 90-day cooling off period between the day a couple initially files for divorce, and the soonest it can be finalized by a judge. A search of King County public records on Wednesday turned up no such filing from Jeff or MacKenzie Bezos.

An equal division of such a fortune would be unprecedented. While Oracle Corp.’s Larry Ellison has been through multiple divorces, none has affected his stake in the software maker. Likewise, Google co-founder Sergey Brin’s stake remained unchanged after he and Anne Wojcicki divorced without fanfare in 2015.

Oil industry magnate Harold Hamm’s separation from Sue Ann Arnall was far messier. The couple filed for divorce in 2012 after 26 years of marriage, and their trial two years later ended with Hamm, the chairman and CEO of Continental Resources Inc., being ordered to pay her $972 million of his then-estimated $16.1 billion fortune. Arnall later sought to reopen the case but the Oklahoma Supreme Court dismissed the appeal in 2015.

While its unclear whether the Bezoses have a prenuptial agreement, a split is unlikely to be as acrimonious. Because so much of their wealth is tied up in a publicly traded company, both have an interest in a business-like divorce, said Michael Stutman, a divorce attorney at Stutman, Stutman & Lichtenstein in New York.

“They have a mutual interest in making sure that no one is concerned that the ship has sprung a leak,” he said. “You need to filter their public comments through that lens.”

When Elaine Wynn divorced casino mogul Steve Wynn, the pair split their 20 percent stake in Wynn Resorts Ltd., with Elaine giving him voting control over her shares and agreeing to limit her stock sales. The relationship began to change after Steve remarried in 2011, culminating in lawsuits and accusations of sexual harassment, forcing him to sell his stake.