Homepage » Market » Commodities To Watch In 2019

Commodities took a kicking in 2018 — with deep losses in everything from oil and copper to coffee and sugar — so what’s in store for the 12 months to come? The inaugural What to Watch of the year offers a selective run-through of prospects and pitfalls for some of the top raw materials, and it’s a reasonably positive picture that emerges.

That roadmap comes ahead of a busy period. The US-China trade fight will be in the news next week, with a US delegation in Beijing for talks from Monday.

In addition, there’ll be more pointers on the macroeconomic outlook, with the World Bank updating its Global Economic Prospects report on Tuesday and a speech from Federal Reserve chair Jerome Powell on Thursday. Before that, Powell speaks in Atlanta later on Friday. 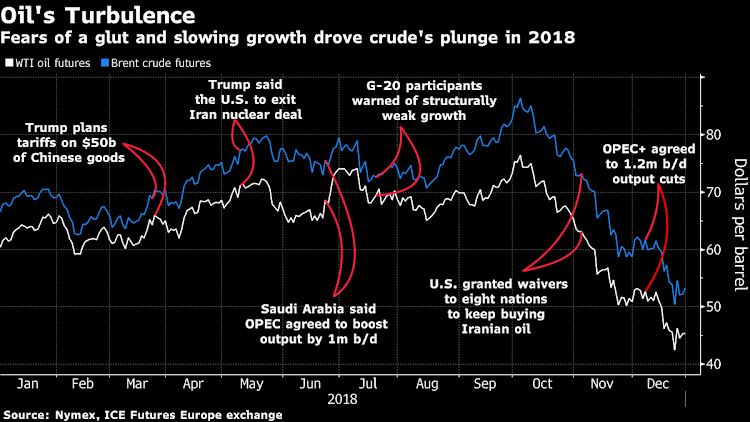 The standout feature in commodity markets last quarter was crude’s swoon from a four-year high into a bear market. The drivers of the reversal were record US shale output, a clutch of sanctions waivers on Iranian flows, and a supply cut from Opec+ deemed by some as too little. Concern about a deteriorating global economic outlook gave bears further ammunition. After that drama, prices may recover, with supply risks underappreciated.

In 2019, watch for more losses in crisis-hit Venezuela as supply risks tumbling below 1-million barrels a day. On top of that, US waivers on Iranian cargoes are temporary, and not all may be renewed in May. And don’t underestimate the Saudi resolve to make the cuts stick. Opec’s next meeting is in April, and prices may have regained some ground by then. The median Brent forecast tracked by Bloomberg is $68 a barrel, compared with about $56 a barrel at present. 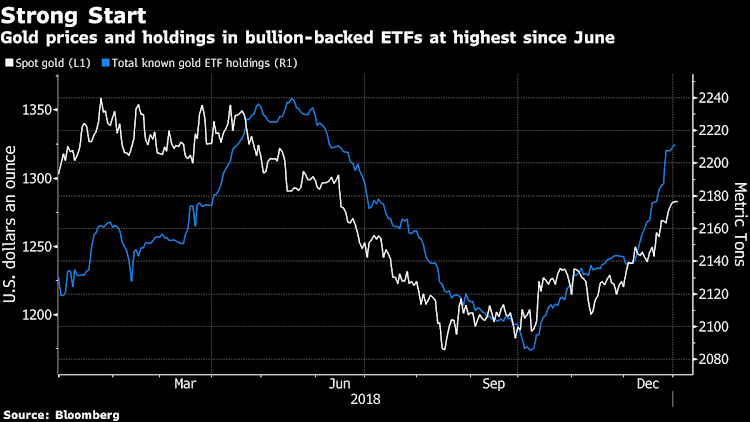 Gold bulls seized the initiative in the final months of 2018 and there’s plenty to suggest the haven may hold up. Look for support for prices at a six-month high as the Federal Reserve goes far slower on rate increases and investors seek protection from equity market turmoil and slowing global growth.

There may be more supportive headlines near term. A golden cross — as the 50-day moving average tops its 200-day counterpart — is close, and a few more tons added to exchange-traded funds will lift holdings to the highest since 2013. A December 11-19 survey of 20 analysts and traders reflected a positive tone, with the median estimate of $1,325 an ounce. Futures just topped $1,300 an ounce. 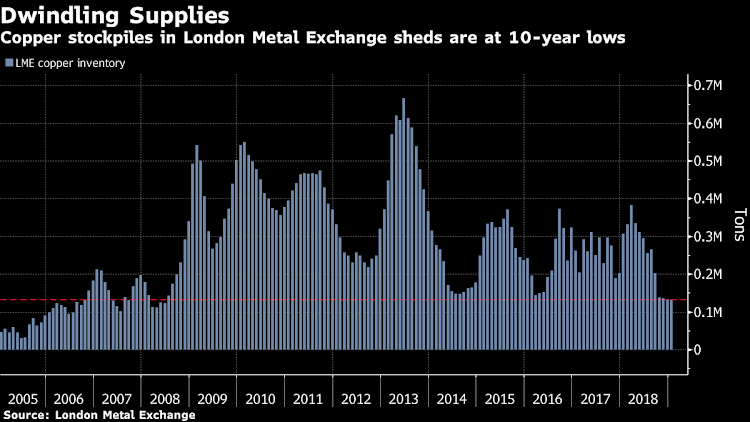 Copper dropped every quarter in 2018 in the worst run since 2015. The metal was hurt by concerns that global growth is slowing, and the US-China trade fight. Still, investors may this year focus more on the supportive backdrop offered by industry indicators. Among these are global stockpiles tracked by exchanges, with holdings in London Metal Exchange sheds at a decade-low.

That drop has come as demand tops supply by some margin: 595,000 tons in the nine months to September, according to the International Copper Study Group. Miners highlight lower grades. And just as trade-war swings hurt copper in 2018, the same could be true in 2019 — but in reverse. Should Washington and Beijing settle some issues, copper could gain. The median of forecasts tracked by Bloomberg puts the metal, which was last at $5,833 a ton, above $6,400 a ton. 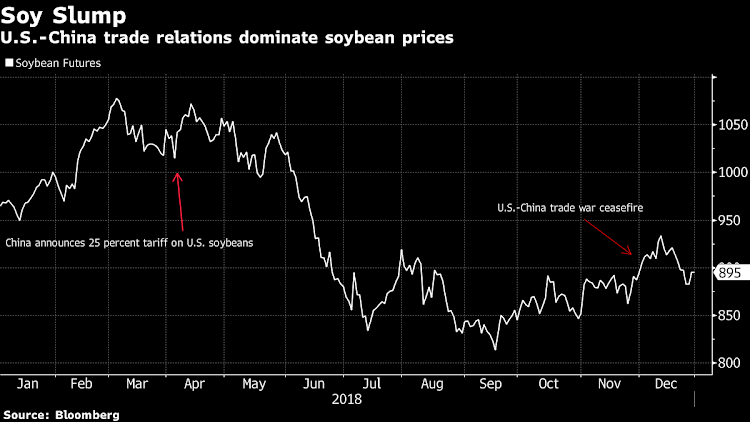 Soya beans get a boost from any inkling of improving trade relations between the US and China, and that narrative should continue to dominate trading in 2019. The oilseed rallied in late 2018 after a meeting between US and Chinese leaders resulted in the Asian nation resuming some imports of US beans. Traders, though, were disappointed by the magnitude of the purchases.

Farmers in the US are hopeful the two nations will reach an accord before the end of a 90-day truce. The key question for trading desks remains whether China, the hitherto top US soya bean buyer, will agree to reduce tariffs on US agricultural products. Brazil’s coming harvest is also a major factor: farmers there are looking at yet another bumper year and that rush of supply would further suppress US prices, especially if China stays closed. 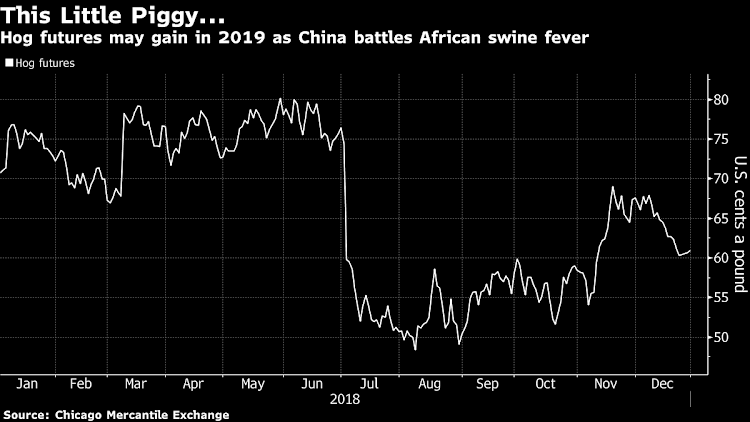 In other farm commodities, it’ll pay to weigh the outlook for hogs. China has more than 400-million pigs, over half the world’s herd; the country also has a serious outbreak of African swine fever that’s been spreading since emerging in 2018. While it doesn’t harm human beings, the disease can be 100% lethal for pigs. This week brought news of more infections, with an outbreak confirmed on January 1 at a farm that had about 73,000 hogs.

There’s concern the outbreak will get a stronger grip within Asia’s top economy, and may jump to neighbouring states, imperilling producers across the region. Should that happen, China may go overseas to supplement supplies, benefiting the US even as the trade war drags on. That may also benefit chicken demand and prices. 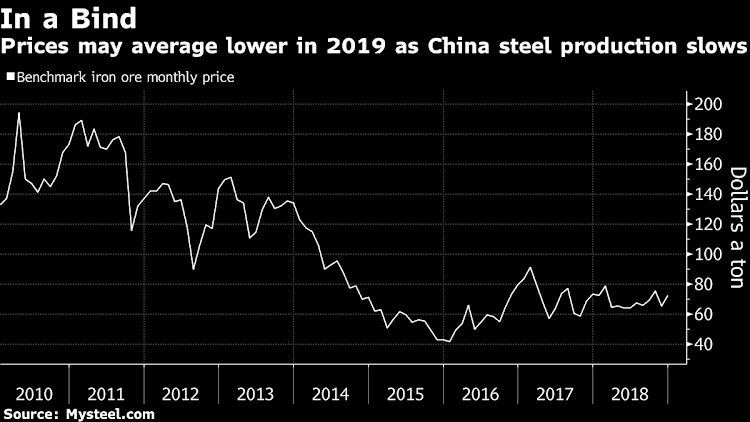 After averaging almost $70 a ton in 2018, iron ore is at risk of a drop. The staple, dominated by flows from Brazil and Australia, will face headwinds from a slower pace of expansion in China, with steel output likely at best to plateau. Policy decisions from Beijing — especially additional stimulus amid the trade war and conduct of the anti-pollution drive — remain wild cards.

Adding to downward pressure, more supply is on the way, with Brazil’s Vale adding tons from the ramp-up of its S11D mine and as Anglo American restarts Minas Rio. Keep a close watch on China mills’ profitability and industry data from the mainland. Profitability tanked in the final quarter of 2018 and the purchasing managers index is back at depressed levels. Heading into the year, Morgan Stanley was among the bears, warning of a return to global oversupply and prices at $62 a ton this year.