Just a couple of months ago, major oil trading houses were predicting the return of $100 crude. Now, with oil prices at half that level, here’s a look at what the slump means for the world economy.

Energy importers like India and South Africa will benefit; oil producers such as Russia and Saudi Arabia will hurt. Central banks under pressure to raise interest rates will get a reprieve; those looking to revive prices, such as the Bank of Japan, face another headwind.

Ultimately, much depends on how world oil demand shapes up as it gets battered by a stronger dollar and global trade spats, and how the biggest producers react.

Saudi Arabia sits between Russia on one side, its ally in managing production to support prices, and the U.S., where President Donald Trump is sending Twitter messages to the producer to get prices down.

All eyes are on the Group of 20 meeting this week to see if a consensus on output emerges between the Saudis and Russians, and if that can carry through to the OPEC gathering next week.

Here’s a Bloomberg Economics chart showing net oil imports (or exports) as a percentage of GDP — cheaper oil helps those at the top of the chart and hurts those at the bottom. 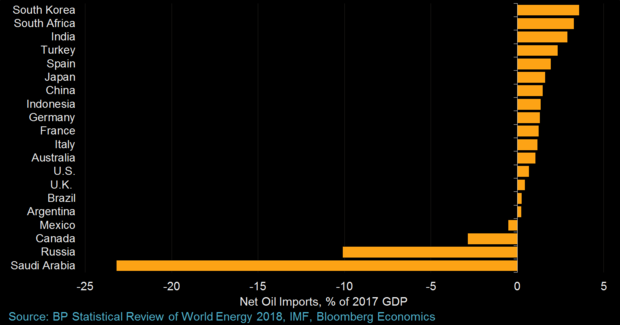 What does it mean for inflation?

One example: Bloomberg Economics says the energy slump is a game changer for India and could mean the Reserve Bank of India shifts to a neutral outlook.

How will emerging markets handle the price drop?

The same discount will cause a 3 percent to 5 percent loss of GDP in most of the Gulf economies, and a slowdown of 1.5 percent to 2 percent of GDP in the U.A.E, Russia and Nigeria, all on an annualized basis, according to the analysts.

What does it mean for the world’s biggest economy?

Trump has described the slump in oil prices as the equivalent of a tax cut. Still, diminishing American reliance on imported oil due to the emergence of shale production will erode the positive economic consequences at the industry level.