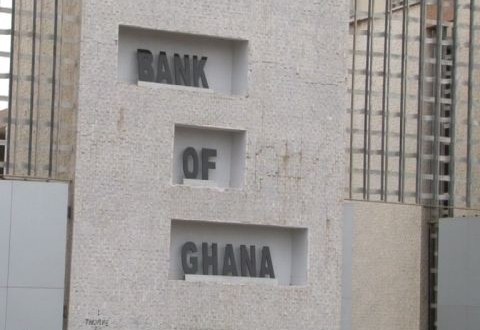 Central banks in sub-Saharan Africa’s largest economies could start diverging on policy when they make interest-rate calls in the next two weeks after oil prices pushed up inflation.

Since the Monetary Policy Committees last met, inflation in Ghana and Kenya accelerated and analysts flagged that the South African economy probably contracted in the first quarter.

Here is a round-up of what the central banks may do over the fortnight: 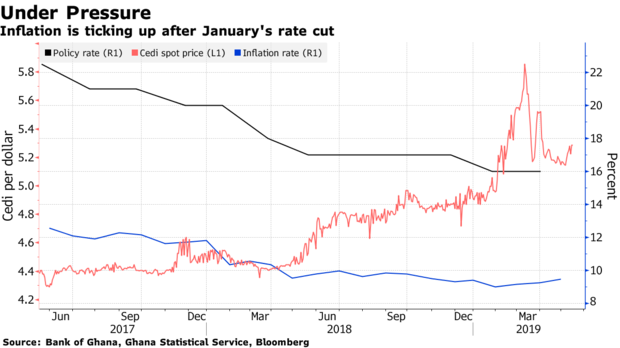 Ghana’s central bank faces a choice between contending with inflation that has quickened to a six-month high and countering price growth by reversing its January rate cut.

“Although inflation has started going up, I don’t expect the monetary policy committee to start increasing the rate so quickly, if they do it will confirm the suspicion that the last rate cut was indeed a mistake,” Patrick Asuming, an economist at the finance department of the University of Ghana Business School, said. Given that the currency has stabilized somewhat, the MPC may opt to “wait and see,” he said.

Nigeria surprised the market with its first rate cut in more than three years in March in a bid to boost economic growth. With central bank Governor Godwin Emefiele’s second term secure, inflation still well above the target range of 6% to 9% and possible price pressure coming from the 67% increase in the national minimum wage that lawmakers recently approved, all but one economist in a Bloomberg survey forecast the rate will be kept unchanged on Tuesday.

“The MPC would want to be careful” after inflation accelerated in April, said Ifedayo Olowoporoku, an analyst at Vetiva Capital Management Ltd. “It will be impudent to cut at this time.”

The Bank of Zambia may raise its policy rate to support the kwacha, Africa’s worst performing currency against in the dollar this year, and counter price growth that is edging toward 8%, the top of its target band.

“An upward adjustment will certainly hurt the real economy,” Chibamba Kanyama, a Lusaka-based economist, said by email. “We are, however, better off hurting the economy via high policy rate than waiting for inflationary pressure to frustrate long-term investment.”

Estimates showing that Africa’s most-industrialized economy may have contracted in the first quarter are unlikely to be enough to sway the Reserve Bank into reversing its unexpected November rate increase because inflation forecasts still hover close to 5%. All 22 economists in a Bloomberg survey predict no change.

Kenya’s inflation rate jumped to a 19-month high in April as a drought, which has left more than a million people in need of food aid, pushed up costs. Price growth is likely to remain elevated until June or July, when the country is scheduled to receive duty-free maize imports, said Jibran Qureishi, an economist at Stanbic Holdings Plc.

“The MPC will not be in a rush to change its policy stance because they will be assessing whether there are any demand-driven pressures on inflation,” he said. “Currently there is no evidence on that.”

While price growth in Angola is forecast to continue slowing, policymakers will probably leave the BNA rate on hold as a worsening drought and fuel shortages skew inflation risks to the upside, said Samantha Singh, a strategist at Absa Bank Ltd.