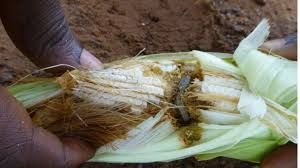 A bloc of West African countries is establishing a committee of experts and national task forces to coordinate the fight against an invasion of fall armyworms that’s damaged about 300,000 hectares (741,316 acres) of farmland in the region, an official said.

Combating the invasion of crop-eating caterpillars that’s struck all 15 countries of the Economic Community of West African States except Sierra Leone will need at least $15 million, Joslin Benoit, senior sanitary and phytosanitary adviser for Ecowas, said in an interview in Burkina Faso’s capital. Ouagadougou.

Fall armyworms have ravaged crops from Zambia to Ghana since arriving in Africa from the Americas last year.

Armies of the black-striped caterpillars can span miles and march through fields in densities of 1,100 per square meter.

Nigeria, Ghana, Benin and Burkina Faso are the most affected countries in the Ecowas bloc and the money will be sought from member states and donors and help pay for insecticide and equipment, Benoit said.

In Burkina Faso, they’ve attacked corn, sorghum, rice and other cereals on more than 30,000 hectares of farmland. Meanwhile in Benin, 25,000 hectares of crops including corn have been destroyed by the pest and the situation is “critical,” according to Noel Koffi, the country’s crop protection director.

“When they enter a farm, they can destroy 50 to 75 percent of the plants in just a few days” he said in an interview. “When we know the importance of corn in the region, we’re worried if nothing is done.”