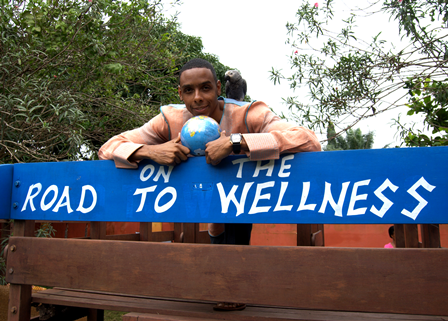 Dr. Marcus Manns, whose name is fast becoming synonymous with ‘Chiropractic’ and ‘Wellness’ in Ghana and across the continent of Africa. He easily comes across as an engaging character, who is playful and yet not wasteful with words and opportunities.
On your first encounter with him, chances are, he will be the first to start the conversation. And you will be captivated by his jovial forthrightness that reveals his non-Ghanaian upbringing, even if his American accent is overlooked.

Another striking characteristic is his healthy looks; which emanates from his life style habits formed from continuous training in the delivery of health and wellness solutions for individuals, families and corporations, no wonder he has significantly established a thriving health care system founded on chiropractic and what he calls “True wellness” in Ghana, where it was virtually unknown. His Chiropractic & Wellness Centres is now well known throughout the country with two offices in Accra, at East Legon and Asylum Down, and in three other Regional capitals; Kumasi, Takoradi and Cape Coast. At these centres, lives are changed, hope is given and myriads of testimonies garnish their waiting area.

Services rendered include Corporate Wellness- affordable health solutions for corporations; Family Wellness- Full family approach to wellness with families investing in their health and wellbeing proactively; Creating wellness- a comprehensive wellness assessment with customized solutions, the only one in West Africa for measuring a person’s degree of wellness, Inspirational speaking- soon to be released books on ‘True Corporate Wellness’ and ‘True Family Wellness’.

“It has been by sheer determination; the will to succeed, no matter what, and his life purpose which is to Inspire Globally by LIVING Fully, LOVING Deeply, LEADING Passionately”. Dr. Marcus says of how he has been able to promote chiropractic since arriving in Ghana in 2000 with US$1,200 start-up money that got dissipated within a few short months.

Dr. Marcus Manns set off from his mostly white rural hometown Basset, Va, USA, with the romantic mindset of reconnecting to his black heritage in Africa and an equally lofty vision of helping to change people’s lives there for the better, and the world at large.
That overriding passion, most probably, is what sustained him through his early difficult days in Ghana but, of course, not discounting his personal resolute determination to succeed. Dr. Manns’ first shock was cultural, where his expectations of a brotherly welcome were dashed by a people who saw him more as a foreigner than as one of their own. Obviously the vast expanse of the Atlantic and centuries of separation have conspired to erase every memory of kinship. He struggled to communicate in any of the over 200 local languages and dialects and that was worsened by the fact that his English had a foreign accent.

Dr. Marcus’ other challenge was that chiropractic was virtually unknown in Ghana adding to the obstacles he would need to overcome. He had soon run out of his initial capital and boldly intensified his to promoting of his vision of services by word of mouth; educating anyone and everyone that crossed his path.

Never the one to give up, Dr. Manns improvised. , he used his tiny bedroom in a shared apartment, which also doubled as his dining room and adjustment room for the delivery of care to his patients and members.

He believes that his natural proclivity to an unflinching determination to find a way out of every difficult situation is fueled by his childhood vision of becoming a “significant” person who would not be remembered only as having lived and worked hard to obtain a decent living, but more importantly, as one who made a positive change in the lives of many people.

Growing up, he had always been fascinated by health care, especially in the area of making people regain bodily motion. He was inspired by his sister, Chama, who had begun training as a physiotherapist. Dr. Manns was in the process of following her into the profession when his life was redirected through a near-fatal motorcycle accident. Following months of difficult rehabilitation, which was complicated by fresh injuries, he succumbed to pressures from his college study mate to visit a local chiropractor, where Dr. Manns says he then became clear of his purpose in life.

And following that new discovery he faithfully studied and trained for four additional years until he received his doctorate in chiropractic from the largest chiropractic school in the world. Shortly after he bought a one way ticket to Ghana, where he has slowly, but surely, settled and developed his now fulfilling life from scratch.

Every turning point in his life and career seem to have a hand of destiny in it. The Ghanaian lady he eventually married and perpetually got re-connected to his African ancestry, he met in a passenger vehicle not many months after his arrival in Ghana, and she served as his impromptu guide. Out of this marriage they have four daughters and a son, Destiny, 12, Aasha, 11, IMAHKUS, 9, Karama, 6, and Marcus, Jr., 4.

Dr. Manns is well-grounded in Ghana now and emphatically declares that his life work is to be based and invested in Africa.
“There are chiropractic laws and standards I need to help develop and pass. I also need to establish chiropractic schools,” Dr. Manns says of his plans going forward, not to mention a nonprofit organization called ‘World Enhancement of Life and Longevity’ (W.E.L.L.)—to make fully operational, and a revolutionary health care system to erect on the bedrock of ‘True Family Wellness’.

These are truly ambitious goals, Dr. Manns admits but says can be done as he recounts earlier obstacles that his persistence overcame.
He recounts, with a whiff of pride, how in the early days he would tackle obstacles that seemed insurmountable, but by the grace of God and with sheer perseverance he somehow bore through one way or the other.

“When my patient list in Ghana grew too long for me to handle single-handedly I hired other chiropractic doctors who eagerly had expressed the desire to join me on this mission to Improve Extend and Save lives” he said.

Initially he realized a number of Ghanaians could not afford quality healthcare so he set up non-profit organization, the African Chiropractic Mission which he subsidized by having local Ghanaian craftsman create art that depicts the importance of the spinal column and that business entity he refers to as Big Idea Art.

He then sold these spine art to chiropractors in America to support the provision of free chiropractic care to the less privileged in villages, orphanages and institutions.
Over the last 13 years, since his arrival in Ghana, Dr. Manns’ patient list has grown to include prominent politicians, among them are heads of states, parliamentarians and government ministers etc. His impressive members’ list make up the who-is-who of Ghana.

He has pressed for legislation on effective education and a cost-effective outreach model for expanding chiropractic to anyone who would listen, thereby creating an unprecedented opportunity for the profession and its philosophy to prominently contribute to the health care system in Ghana. And eventually, Dr. Manns hopes, for developing countries all over the world.

Having come this far, and seeing brighter opportunities emerging for fulfilling his dreams, a return to the now distant Basset is not even remotely on Dr. Manns’ radar presently.