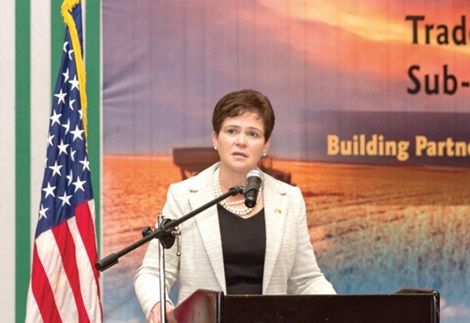 Homepage » Economic » US Dept. of Agric to invest $56m in local poultry industry

The United States Department of Agriculture (USDA) is to invest more than $56million in the Ghanaian poultry industry to help revive the struggling sector.

The project, “Food for Progress”, is intended to enhance the value chain of poultry production and processing. It will also promote the use of improved and quality poultry feeds and concentrates.

The Deputy Secretary of the USDA, Ms. Krysta Harden, who announced this in Accra yesterday, said the project will also train Ghanaian poultry producers, improve feed milling practices and products, enhance the storage and management of feedstuff, as well as promote egg consumption, among other things.

Ms. Krysta Harden was speaking at a news conference where she launched the “Food for Progress” which has already taken off. The multi-faceted project is also expected to benefit soya bean and maize growers, as demand for the two cereals is expected to increase by the end of the programme.

The five-year project will be implemented by the American Soybean Association’s (ASA’s), World Initiative for Soy in Human Health (WISHH) Programme, and ACDI VOCA, a US-based non-profit organisation.

Ghana’s poultry sector has dwindled over the years as a result of intense competition from imported poultry meat and the decreasing profitability of egg production locally.

According to the Food and Agriculture Organisation (FAO), domestically produced broiler meat fell from nearly 60 per cent of all poultry consumed in Ghana in 2000 to 20 per cent in 2011.

The high cost of quality blended feeds that represent more than 60 per cent of total production cost and inefficient feed management practices are largely responsible for the high production cost of poultry products locally.

Ms. Harden explained that the initiative was not only to help farmers and producers enhance the value chain of poultry production and processing but also to add value to the produce for their consumers.

The President of ACDI VOCA, Mr Bill Polidoro, in his remarks said the project included increasing the sector’s commercial performance by building co-ordination between firms and promoting the adoption of quality standards.

He added that strengthening business planning and market-penetration strategies and reinforcing buyer-supplier linkages to make the Ghanaian poultry market efficient and effective were the objectives of the project.

He also said the initiative was expected to increase the competitiveness of the domestic production and processing of poultry and eggs, as well as improve input markets, and promote strategic investments.

For his part, the Executive Director of American Soybean Association, Mr Jim Hershey, said farmers would be trained on post-harvest measures to enable them to handle feeds during those seasons.

He added that egg consumption would be promoted among Ghanaians to help improve the nutrition status of the populace.

The Minister of Food and Agriculture, Mr. Fifi Kwetey, said the initiative would complement the government’s effort to revamp the poultry industry which was struggling.

He pledged that the government would support the implementation of the Food for Progress initiative to promote the industry.