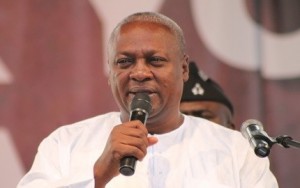 After a closed door meeting between the President of Ghana, John Dramani Mahama and Deputy Minister for Economic Affairs of the United Arab Emirates, Sheikh Al Gaith, government of the latter has offered to support Ghana’s infrastructural development with a US$100 million grant from the Abu Dhabi Development Fund.

The meeting took place at the Presidential Villa in Akosombo.

His Excellency Al Gaith led a delegation of investors to hold discussions with President Mahama on various investment options in the country.

The UAE government is also supporting a number of projects in Ghana including a new 350MW combined cycle power plant that will also produce 100,000 cubic meters per day of desalinated water.

The meeting also discussed port expansion with the Dubai Port Authority and bauxite mining at Nyinahin.

The UAE delegation indicated their willingness to increase their investment portfolio in Ghana.

Presidential Spokesperson, Ben Dotse Marlor, confirmed the commitment of the government of the United Arab Emirates to partner Ghana to develop infrastructure.

“One key thing that emerged from the discussions between President Mahama and the Deputy Minister for Economic Affairs of the United Arab Emirates was an offer from the UAE for a support of about a 100 million US dollars from the Abu-Dhabi development fund to be used by the government of Ghana for various projects including infrastructure projects,” he  indicated.

According to him the offer came directly from the team and it’s well appreciated.

The team that accompanied the deputy Minister included officials of TAQA who presently operates a thermal generating plant in Takoradi in the Western Region.

President Mahama also received strong assurances from the government of the UAE to support TAQA to establish a 350 megawatts combined cycle power plant capable of desalinating sea water for consumption.

“A memorandum of understanding that is being signed indicates the fact that the Abu-Dhabi government is pledging to support …,”Marlor explained.

According to the Presidential spokesperson, the meeting also discussed opportunities in Agriculture, Mining, Energy and Power and many other fields that offer great investment opportunities and returns.

‘’These projects if realized have a huge potential of creating jobs and also expanding the economy,’’ he noted.

BOST fuel price margin increases by 3 pesewas, effective June 1 webmanager June 1, 2020
Close
Business World Ghana
Proudly powered by WordPress Theme: Magad.
We use cookies for functional and analytic purposes to ensure that we give you the best experience on our website. By using this website, we assume that you give your consent to this policy.Ok