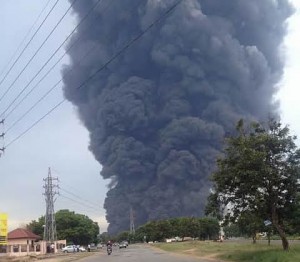 Another pipeline at the Tema Oil Refinery has exploded in what appears to be a second in the day, around the Cocoa Processing Factory in Tema on Tuesday afternoon.

The first pipeline was reported to have exploded around 3:00 pm which led to an inferno that ravaged some buildings around the area.

Just when fire and police personnel arrived to keep the fire under control, another pipeline exploded around 4:00 pm. 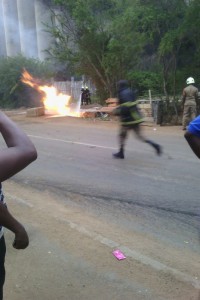 The causes of the explosions have been linked to some leakages on the pipeline. Officials of TOR were on their way to check the leakages when the explosion occurred.

Electricity supply to the area has been disconnected as fire men work tirelessly to bring the situation under control.

Meanwhile, the whole area has been engulfed by a thick dark plume making its way into the sky.

The area has been barricaded amidst some amount of chaos as police try to maintain order and direct traffic.