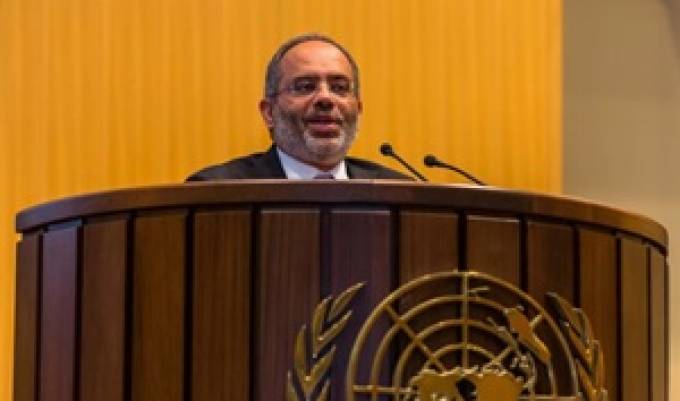 African Transformation will not happen spontaneously, but rather as a result of deliberate and coherent policies that are entrenched into a harmonised development strategy and enlightened by transformational leadership, Dr. Carlos Lopes, UN Executive Secretary of the Economic Commission for Africa, has said.

He was speaking at the African Development Week and Conference of Ministers of Finance, Planning and Economic Development that ended in Addis Ababa last week.

The meeting, convened by the Economic Commission for Africa (ECA) and the African Union Commission (AUC) from 31st March to 5th April, discussed the critical issues impacting Africa’s development.
Held under the theme ‘Toward an integrated and coherent approach to the implementation, monitoring and evaluation of Agenda 2063 and the Sustainable Development Goals (SDGs)’, delegates at the African Development Week sought to integrate the two agendas when formulating the continent’s socio-economic development plans.

“We’ve had a week packed with meetings, all focused on the central question of our time: how to achieve economic transformation in order to change the lives of African men, women, children, young and old, urban and rural for the better,” said the AUC Chairperson, Dr. Nkosazana Dlamini-Zuma.

Experts and ministers agreed Agenda 2063 and Agenda 2030 provide a framework for the continent to transition toward a new people-centred development trajectory that combines economic, social, and environmental considerations.

They have requested the key African Institutions — ECA, the AUC and African Development Bank (AfDB) — to develop an integrated monitoring and evaluation framework on the implementation of both.

“The implementation of Agenda 2063 will really help us to meet the Sustainable Development Goals of ending poverty, zero hunger, quality education, water and sanitation, protecting the planet, gender equality, reducing inequalities and ensuring prosperity for all,” said Dr. Dlamini-Zuma.

The African Ministers and leaders also agreed that strong continental and sub-regional financial institutions, along with multiple funding sources are essential for the successful implementation of the continent’s transformation agenda.

Finance Ministers endorsed the operationalisation of three pan-African institutions: the African Central Bank, the African Monetary Fund, and the African Investment Bank during their meeting.

Measures to curb illicit financial flows were again a hot topic. Speaking at the closing Press Conference, Dr. Dlamini-Zuma asked the question: “Why aren’t we talking to those holding the illicit funds to repatriate the money?” Meanwhile, delegates called for intensified measures and deepening engagement with receiving countries in order to tackle the unfavourable practices by multinationals that impact Africa’s people negatively.

At the close of the week, Ministers of Finance, Planning and Economic Development adopted 17 resolutions to support Africa’s efforts toward sustainable development.

Several flagship reports were launched during the African Development Week.

The 2016 Economic Report on Africa explores how to transform and ‘green’ industrialisation, while this year’s African Governance Report IV centres on new ways to measure corruption. In addition to the 20 Country Profiles launched, two extensive reports on Regional Integration — including a new Index — were also unveiled.

Commenting on these reports at the closing press conference, ECA’s Dr. Lopes said: “We contribute to knowledge generation that is African-centred and do not apologise for it,” adding: “The time has come to accelerate the speed of structural transformation.

Knowledge created through these reports should shift our mindset to transformative policies”.

The 2016 Annual Adedeji Lecture was delivered by the unconventional Development Economist Dr. Ha-Joon Chang, who also launched a book he wrote for the ECA titled ‘Transformative Industrial Policy for Africa’.

In addition to the dialogue on implementing Agenda 2063 and the SDGs, topics at other side-events focused on migration, pan-African investment, urbanisation, financing, social protection in Africa, and the establishment of an African Institute for remittances.

A series of thematic publications on subjects including The realities of investment treaties; The blue economy; Africa’s demographic profile and a look at macro-economic alternative frameworks for Africa, were also launched.