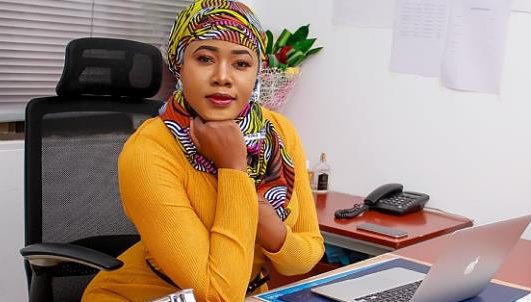 “We certainly do not need help, we need JVs or partnerships. Owning shares is a better option to peanuts on a business venture you could own”.

These formed parts of Rashida Saani Nasamu’s 20 minute presentation on BBC when she was invited to speak as a young enterpreneur from Ghana by the UK Independence Party during their referendum prior to Brexit.

In October last year, Rashida Saani Nasamu, CEO of I-ZAR Group was adjudged winner in the Communications category of the 40 under 40 awards and also won the People’s Choice Award as the most voted under 40 Female Chief Executive of the year.

At this year’s edition of the annual awards which was held in Accra recently, Ms Nasamu was honoured with the First Among Equals Award for her efforts as a young entrepreneur with diverse business affiliates.

I-ZAR Group which started 11 years ago as a strategic communications consulting firm (I-ZAR Ltd), has grown into a multi-faceted company with affiliates in real estate and construction (I-ZAR Homes), media investments, retail as well as social enterprises.

Speaking to The Mirror at her Accra office last week, she said although she didn’t set out hoping to win awards, such recognitions were fulfilling and presented another opportunity to remind the team of how far they had come and the efforts they had put in place to make things work despite the many challenges.

The recent crisis in the banking sector which resulted in the collapse of some financial institutions is having a negative impact on businesses, however to Ms Nasamu, the secret ingredient to their success was thinking outside the box and reasonably diversifying into other areas while enhancing their skills.

She said even without the banking crisis, the business scene evolves by the day and the surest way to thrive was to be up breast with time and modify operations to meet the changing demands.

“Its usually quiet easy climbing to the top in business with the right investments, however, there is the for a constant strategy for sustenance. Constant special initiatives ensure to ensure that you dance to the rhythm of contemporary business dictates.” She said

“When we started making profits from our communications jobs, we decided to venture into real estate, focusing on a house at a time. Today, we have a number of properties dotted in different parts of Accra.

“We are almost done with our shea butter processing factory located in the Northern Region which would start operating soon on skill development and wealth creation especially for the youth in the area.

This must have been an inherent passion that earned Ms. Nasamu an invitation as the first young entrepreneur from Ghana by Jeune Afrique, organizers of the annual high profile Africa CEO forum to moderate a session dubbed “africapitalism”- an economic philosophy which highlights the fact that the African private sector has the power to transform the continent through long-term investments, creating both economic prosperity and social wealth.

Ms Nasamu admits that starting a business and sustaining it was a huge task but from her experience, staying determined and prioritising would always help in business growth.

She said she understood the challenges most young entrepreneurs faced as she personally started her business from her dining table at home.
“Because of the image I wanted to create for the company, I had to design convincing business cards & proposals.  Whenever a potential client called for a meeting or pitch, I would quickly suggest that we met in their office since I was just operating from home.” She recounted.

She added that today, young people were even lucky to have social media platforms where they could easily advertise their skill and services without paying huge sums to traditional media for exposure.

According to Ms Nasamu who is a strong advocate for youth development, she hopes that she’s able to inspire young graduates who leave school hoping to be employed or waiting on government initiatives.

“The government of the day would always have initiatives but all of us cannot be absorbed under these initiatives. Some of us must employ ourselves and others as well. Unfortunately, most of us undermine certain fields and see “white collar” jobs as the only way out.

“Rather than sit on Facebook or Instagram and comment on every issue and picture, why don’t you promote your skills? Why don’t you sell your ideas to your friends and relatives?

“When I tell people I didn’t start this business with so much money, they don’t believe it, all I had then was my phone but I was determined to make it work and that is how we have accomplished our feats all these years – perseverance.”

She said it was easy for young people to assume that she did not understand their situations and was only saying such things in abstract but her humble beginnings 11 years ago and how she managed to work around the little resource available to her was enough motivation.

She also cited personal skill development as an essential tool to business development.

Ms Nasamu the 24th of the 25 children of her father grew up in a typical Muslim home where virtues of respect, humility and integrity were instilled in her at a younger age.

She believes these virtues instilled in her by her father at an early stage have guided her through her personal life and career.

A former senior girls’ prefect of the Tamale Secondary School, she is an alumna of the Ghana Institute of Journalism, holds a Master’s in Communication (International Public Relations) from the Cardiff University, United Kingdom and an Executive MBA from the University of Ghana.

Last year, she was inducted alongside other prominent West Africans into the West Africa Nobles Forum. Prior to setting up her business, she worked as a broadcast journalist with Metro TV and ETV.