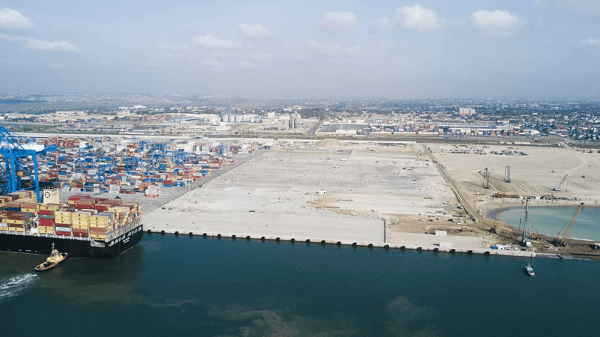 The second phase of the expansion works of the Tema port is progressing steadily, with the handing over of the water front of the third new berth.

The new stretch of waterfront is being delivered seven months ahead of the scheduled completion date in June 2020. With the completion of the waterfront, the terminal now consists of 920 metres of available berth; 43 hectares of stacking space; 25 hectares of common user area and all required facilities.

It follows the successful opening of the first phase of the expansion works dubbed MPS Terminal Three at Tema Port in June of this year with 700 metre of quay wall and two new berths.

A press release issued by the Meridian Port Services (MPS) indicated that the remaining 80 metres of quay wall and a further 20 hectares of stacking space of the third new berth would be made available in first quarter of 2020.

“The new port operational facilities have been designed and integrated along with several automated processes and systems including scanners and weighbridges at the gate-in and gate-out.

“These high-end technology and equipment have been synchronised with its fully integrated container terminal operations at the new port facility to eliminate congestion and maximise efficiency levels without compromising on security at the port,” it said.

The release further explained that the expanded infrastructure would bring opportunities to the shipping lines, starting with deploying larger vessels destined for West Africa with deep draft and be able to lighten up vessels at Tema as first port call among other things.

Combining MPS Terminal 3’s location, infrastructure and superstructure,  the release stated that MPS was well-suited to provide the needed elements for a hub-feeder system where shipping lines could create regional services efficiently connecting the country to the various West African ports and beyond.

According to it, the consequential benefits that Ghanaian shippers and consignees were deriving from Terminal Three were shorter transit time, lower sea freight, connectivity to the port following Tema on the same vessel rotation and opening new trading routes in addition to effective penetration into new markets.

“Between now and March 2020 and while ramping up operations on part of the third new berth, MPS shall start the final transition from T2 to T3 and gradually wind down its operations at T2 which will be operated by GPHA.

“The early takeover of T2 by the Ghana Ports and Harbours Authority (GPHA) will present significant prospects for multi-purpose vessels operators (RoRo, General Cargo, Break-Bulk, Tankers, etc.) as well as the bulk commodity importers and exporters.

“The deeper draft and the potential investment in general cargo handling systems will bring about increased level of efficiency and savings, adding value to the trade and the economy at large. During the remainder of 2020, the fourth new berth and reclamation of the areas behind it will also be completed far before their committed date in 2022,” it added.

The release indicated that the global trade, supply chains, production processes and countries’ economic integration were heavily dependent on port efficiency and the supporting logistics.

“With the rolling out of the Africa Continental Free Trade Area (AfFCTA), Ghana is able to harness this opportunity in the areas of trade and industry, job creation and will significantly open up the economy to more industries and sustainable investments. MPS’ Terminal Three has its role cut out to provide the efficient connectivity between the Ghana’s importers and exporters with AfFCTA markets and beyond,” it stated.