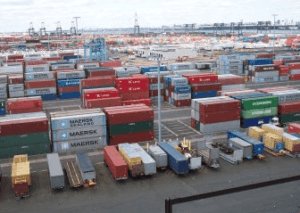 It also recorded a rise of 2.2 million metric tons in exports, representing a 42 per cent.

Captain Ebenezer Afadzi, the Director of Takoradi Port, made this known at a press soiree organised by the port management in Takoradi to interact, inform and educate stakeholders about development of the port.

Despite the positive total port traffic, he said, a decrease of 13 per cent was recorded in imports, 21 per cent decrease in transhipment and 26 per cent in transit, but added that, it was only exports that registered an increase of 43 per cent.

According to him, despite the increase in commercial vessel calls from 645 in 2018 to 743 this year, oil supply vessel calls decreased from 1,067 calls to 793 this year.

However, he was hopeful the situation was set to change in the coming year since a lot of activities were expected in the oil and gas field in 2020.

Under the “New Bulk Jetty,” he said the construction of 800 m quay wall was completed and installed with 48 fenders and 28 bollards, and that discussions were on course to ensure the installation of a 3,000mt/hr capacity conveyor system to ensure efficient service delivery.

He said in August this year, the first quay block was positioned to signal commencement of work on new multipurpose container terminal and that all things being equal 600 metres of the quay wall would be completed in November 2020.

On the “New Oil Jetty,” Captain Afadzi said, so far, 95 per cent of the first phase of the 300 meter -14 Chat Datum facility were completed.

Details of completed works include; the installation of 71 foundation piles, five loading arms and the mounting of seven Dolphins with cat ways between them.

The second phase of the New Oil Jetty project, which was ongoing involved the installation of a fire fighting system, pigging system, heat tracing line and metering.

It would be operational by the end of the first quarter of 2020, he said.