Michelle Tran is an American intern at Business World. A student at the University of Oregon’s School of Journalism and Communications, Michelle is in her fourth year studying advertising and multimedia.

I have been very excited to try various places in East Legon. My group of friends and I have been scouting for a new hangout place after a local Turkish restaurant that will not be named decided to jack up the prices. With Starbites being only a few miles from American House Road, this was a great location.

Starbites is an open restaurant, decorated with quaint star-shaped lamps and wooden furnishings. I arrived with my large group of friends (twelve in total) and they were quickly very accommodating, no funny business. I definitely noticed this because often when you have a large group of obrunis wandering in, it takes awhile to figure out where they can sit and be noisy and not bother customers. However, since the music is loud and the seating open, anyone can have a great time without being a nuisance.

When we opened our menus, we were delighted at the huge choice of what our group likes to call “obruni food.” Burgers, pizza, salad, wings, even a full English breakfast if you wanted one. They even have fresh smoothies you can choose from and all the choices sound heavenly. We were salivating just thinking about it. I decided to go all out on the burger, and chose the bacon, egg, and avocado. A fried egg in a burger is always a winner for me. Most of us decided to get some form of a burger, just because we missed it so much. 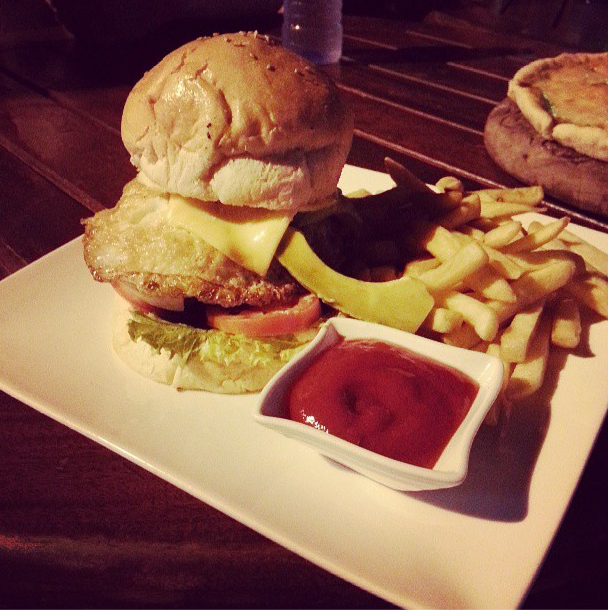 Now, I had previously looked up reviews of the place just to get an understanding of what to expect. Most of the complaints have been about the length of time it took to prepare the food. It took about 20-25 minutes to prepare all our food. That’s food for a group of twelve while also maintaining a full restaurant. As someone who has worked in the food industry, that is perfect time for a modest-sized staff.

I had ordered first, so my food was the first to arrive. My group of friends whooped and cheered when they saw this massive towering burger with generous slices of avocado (in the U.S., you can measure how stingy a restaurant is by how much avocado you have in your order). I tried to pick up as much burger as I could with two hands and sunk my teeth in for a massive bite (with my friends cheering as if I was competing in an eating contest). It was huge. It was delicious. The fried egg was cooked perfectly and the bacon was real bacon. At some point between my giant chomps of this behemoth, a slice or two of avocado escaped, but I would never complain about a restaurant giving me too much.

In addition to this burger I had tried some of my friends’ dishes. The barbeque wings were spicy and full of flavor. I think when I come here again I will have to order those. I was not a huge fan of the cheese pizza– the crust tasted too much like dough, which meant it should have been cooked for longer. I also got a taste of Simple Serenity, a delicious melon, orange, honey, and mint smoothie. It tasted like a non-alcoholic mojito and I definitely felt serene after that one sip.

My one complaint is a complaint that I have been holding often with a lot of restaurants here in Accra. The napkins are very small and you only get one. After eating a Goliath of a burger, I needed at least four of those cocktail-sized napkins to get the leftover grease off my fingers. However, that is a small bruise for such a satisfying meal. The pricing is very reasonable, with most of the meals averaging 15-20 GHC.

In the end, this place hits the spot for me and my friends. To have all of us happy with our meals is rare, with “obruni food” no less. With a great location in East Legon, this will be one of our new go-to places.