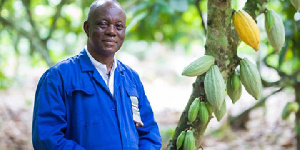 Samuel, who is also a professional accountant, was named among five winners from Africa and Indian Ocean region, and twenty globally.

According to a press release issued in Paris and copied to Cocoa Post, 50 entrants were shortlisted for the 2019 Edition of the International Cocoa Awards, following a selection and evaluation process involving 223 cocoa samples submitted from 55 cocoa-producing countries.

Three cocoa farmers from Ghana made the shortlist, namely Augustine Blay and Joseph Jongmaatey both of Elubo in the Western Region and Samuel Tetteh-Korboe of Akyem-Tafo in the Eastern Region.

The world winners were celebrated at the Salon du Chocolat, Paris, shining the international spotlight on the work of cocoa farmers, and the diversity of cocoa around the world.

Cocoa diversity is vital for production, as it provides the different flavours, resistance to pests and diseases, and resilience in climate changes. Providing incentives for safeguarding cocoa diversity to farmers and national organizations ensures a portfolio of options remain available for the future.

“The most remarkable evolution of the Cocoa of Excellence Programme is the enthusiasm of the cocoa-producing countries to participate in greater numbers every edition. We started this great adventure in 2009 with 20 countries and today we have 55 countries and hope that at the next Edition in 2021 we will reach 70?, said Brigitte Laliberté, Cocoa of Excellence Programme Coordinator, Alliance of Bioversity International and CIAT.

Brigitte Laliberté added, “we are entering a new era for cacao that makes us discover all the potential and the pleasures that its genetic diversity, its environment, its culture, and the know-how of all these women and men that grow cocoa and upon which their prosperity depends”.

In 2017 a member of the Cocoa Abrabopa Association, Simon Marfo, won the prestigious Cocoa of Excellence International Cocoa Award together with 18 cocoa bean samples from across the world.

Mr Marfo’s winning cocoa bean samples competed alongside those of his compatriots, John Kofi Assiamah and Noah Obeng, among 188 samples from 40 countries.

Ghana’s ICA 2017 winner, a beneficiary of fine flavour training by the World Cocoa Foundation’s African Cocoa Initiative, also had his sample adjudged as one of the four best from Africa and the Indian Ocean region.

Back home in Ghana, Mr Marfo, was honoured by the Ghana Cocoa industry regulator, COCOBOD, for the historic feat.