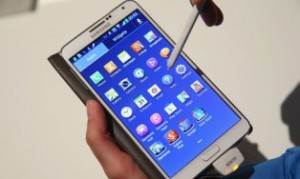 The Samsung Galaxy Note 4, which is due to be launched globally next month, will be available for purchase in Ghana in the same month, Samsung Ghana Director of Handheld Devices, Jaspreet Singh has hinted.

He said the company is working hard to make the handset stand out in terms of the offers and opportunities it brings to the local market.

The other Samsung Galaxy handset like the Note 2 and Note 3, plus the S3, S4 and S5 which preceeded this one, came with insurance cover against damage for the African market.

The user has two opportunities to get free repairs or replacement if the phone’s screen is broken or if it falls into water. The cover is called accident damage from handling (ADH). It comes with the e-warranty registration, which lasts for 24 months.

The handsets also came with some data packages when purchased on particular networks.

Asked if the Galaxy Note 4 will also come to Ghana with similar benefits like the ADH cover and other benefits, the Singh said “we are working hard to differentiate it on the local market.”

Samsung Galaxy Note 4 is a large new smartphone that sticks to the formula of the Note 3 while rounding out many of its predecessors rough edges. The Note 4 looks very familiar, but that’s not a bad thing: Samsung has been iterating on its wildly successful phablet for four years now, and that means it’s had plenty of time to improve upon its weak points. With Apple reported to be announcing a large, 5.5-inch iPhone just a week from now, it’s critical that Samsung make this new Note as appealing as ever.

The Note 4 has a 5.7-inch AMOLED display, just like its predecessor, but it’s now sporting a Quad HD resolution, which should make for a huge improvement on sharpness. As usual, Samsung is also touting just how much more vibrant an AMOLED display is than an LCD display. That’s not something that everyone is a fan of, but it definitely makes colors pop. There are changes to the Note’s software here too. One new feature allows an app to be shrunk down into a smaller window that can hover over the top of another app and still be used. Apps can also be put into a two-app split-screen view.

One of the notable additions to the Note 4 is a metal band wrapping around its side, much like the recent Galaxy Alpha. There’s still a faux-leather style on the back, but the small changes go a long way to making this new Note look much better than what came before it. It’ll be available in black, white, pink, and bronze. Naturally, the S Pen is back as well, allowing the phone to be controlled with a stylus. Samsung says that the Note 4 has double the pressure sensitivity of the Note 3.

The phone has a 16-megapixel rear camera with image stabilization and a 3.7-megapixel front-facing camera. This new Note also includes a heart-rate monitor and a fingerprint sensor like the ones added to the Galaxy S5 earlier this year. The phone includes either a quad- or octa-core processor, 3GB of RAM, and 32GB of storage that can be expand through MicroSD. The phone will be runing Android 4.4.4 KitKat.