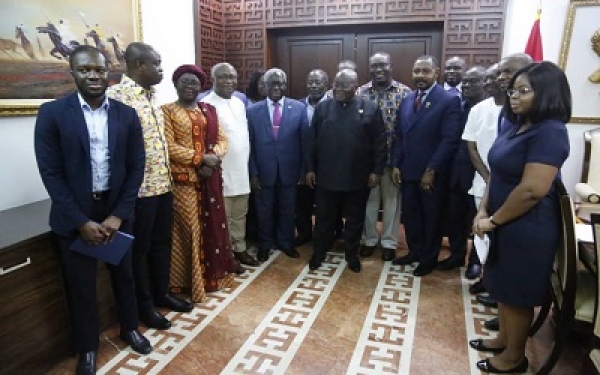 A strategic document and a two-page charter that give clear guidelines and roadmap for the achievement of the ‘Ghana beyond Aid’ agenda have officially been presented to the President.

The documents were presented to the President by Senior Minister Yaw Osafo Maafo, chairman of the Ghana beyond Aid Chatter Committee, at the Jubilee House in Accra yesterday.

The documents are expected to be presented to parliament for further deliberations and adopted as a national policy that would guide the conduct of government business, as well as guide the activities and conduct of state institutions in the country.

President Nana Addo, speaking at the meeting, said initiating the slogan ‘Ghana beyond Aid’ formed part of the mobilising strategy to create awareness among the citizenry that nobody could best develop Ghana than Ghanaians themselves.

The President emphasised that the new awareness on the continent over the last three decades suggests that Africa would only be able to tackle its development challenges by weaning itself from overdependence on aid and donor support to utilising its own resources and implementing home-grown policies.

“Progress would be made when we accept responsibility for our own actions and thereby conduct ourselves in a manner that would be fruitful,” he emphasised.

The importance of the strategic document, the President said, would “guide as to how we go about applying the slogan – Ghana beyond Aid – for it to become meaningful in the lives of the 30 million Ghanaians and those outside Ghana.”

The President on previous occasions emphasized the need for Ghana to mobilise its own resources for national development and to make a shift from the overdependence on foreign aid and handouts, arguing that there will never be enough aid to develop Ghana to the level that we want.

“Aid was never meant to be what would bring us to the status of a developed nation,” he emphasised.

To achieve self-reliance, he said, requires a deliberate change in the structure of the Ghanaian economy, the nature of its infrastructure and the premium it places on education, as well as holding firm to the values that define its people.

It is in furtherance of this agenda that the President, in June last year, inaugurated the 13-member Ghana beyond Aid Chatter Committee to give substance to the concept and provide a calendar of implementation that would guide the country on its goal of attaining self-sufficiency.

Others are Dr Anthony Yaw Baah and Mrs Philomena Sampson, both of the Trades Union Congress; Mr David Ofori Acheampong of the Ghana National Association of Teachers; and Messrs Kwaku Agyeman-Duah and Nana Osei Bonsu of the Private Enterprise Federation.

The rest are Dr Yaw Adu Gyamfi of the Association of Ghana Industries; Dr Eric Yeboah of the Office of the Senior Minister; and Dr Yaw Ansu, a senior policy advisor at the Finance Ministry.

The President, who was enthused about the work of the committee, expressed gratitude to its members for dedicating their time to advance “the Ghana project”.