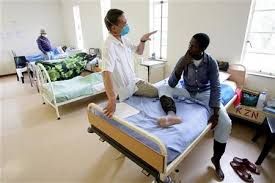 PRIVATE-EQUITY companies are taking advantage of a surge in demand for health-care products in Africa to invest in a market that’s suffering from government underfunding.

Abraaj Group invested $145m to improve facilities and medical equipment at hospitals and clinics in Tunisia and Egypt, with a similar amount now being planned south of the Sahara. London-based Development Partners International may invest as much as $150m in health-care assets for its second fund in Africa over the next three to four years. The fund, which closed in April last year, took DPI’s assets in the region to $1.1bn.

“We bought into the growth story,” said Sofiane Lahmar, a partner at DPI, which has two pan-African private-equity funds. “That’s about macroeconomic trends, the high level of population growth, the aging and urbanisation of the population that creates more need for pharmaceutical products, and that there are more complex diseases.”

Healthcare spending in Africa is expected to grow about three times faster than in developed markets because of rising income levels and the move from rural areas into cities, according to Dubai-based Abraaj, which has $9.5bn under management. The number of people in Africa over the age of 60 will increase by 64% by 2030, according to the UN. At the same time, after increasing by 670-million people over the past 60 years to 856-million, the World Bank predicts the population will probably reach 2.7-billion by 2060.

The healthcare industry is also attractive because it can overcome the ups and downs of business cycles at a time when sub-Saharan Africa economies are expanding at their slowest pace in 15 years. Government budgets from Mozambique to Ghana are coming under pressure from lower commodity prices and declining foreign donations.

“Also, there’s been a big push by governments in Africa to promote local production because it reduces the import bill and it promotes transfer of technology and job creation,” Lahmar said.

DPI’s investment in 2013 in Biopharm, a leading Algerian pharmaceutical wholesaler and generic drug producer, is performing better than the 25% internal rate of return it generally targets, he said.

After investing in telecommunications, food services and retail business on the continent since its formation in 2007, DPI is now considering buying businesses in sub-Saharan Africa either in pharmaceuticals or health services, Lahmar said.

The Abraaj Growth Markets Health Fund, which has raised half its $1bn target, plans to invest “a few hundred million dollars over the next few years” in hospitals and clinics among poorer neighbourhoods in Nairobi, Lagos and Addis Ababa, Khawar Mann, the company’s health-care team managing director, said by phone from Nairobi.

The fund is seeking internal rates of returns of more than 25%, he said. He couldn’t be more specific about amounts, in line with company policy. The Cambridge Associates’ US Private Equity Index returned 5.9% net last year.

While investments into health care are still relatively small, they are increasing. In southern Africa, where total private-equity funds under management amount to R165bn, at least 4.7% of investments in 2015 went into health care, compared with 1.2% the previous year, while less money flowed into banks and insurers, infrastructure projects and mining, according to data compiled by the Southern African Venture Capital and Private Equity Association and KPMG.

There are also gaps for companies to invest in projects and businesses around HIV-AIDS. In SA, which has a 19% HIV infection rate among adults, the government is expanding testing and treatment as it faces increased expenses for new drugs as effectiveness wanes. Foreign donors cutting AIDS funding and a state budget that must also improve basic care in the world’s most unequal society offers opportunities for investors to fill the gaps.

“The economics behind AIDS and HIV can be lucrative because treatment requires not only medicines but also nutritional requirements,” said Siyabonga Nhlumayo, a partner at Medu Capital, a Johannesburg-based investment-management company with R1.6bn under management. “There are opportunities through the value chain from wholesalers all the way to distributors.’’

Medu Capital invested R30m rand in Medipost Courier Pharmacy, made back the money within two years and sold the business in 2014, he said, declining to give details. Medipost took over the distribution of prescription drugs and other products and extended deliveries throughout SA, beyond its home base in Pretoria.

“There is a big emerging middle class in Africa” consuming more drugs, said Andre Sturmer, managing director of Trium Investments. The company eight years ago invested in Johannesburg-based Trinity Pharma, which sources and distributes generic drugs to some of the country’s largest retailers, making more than five times what it put in.

“It’s about people being more educated of what they can do to prevent and to treat illnesses,” Sturmer said.