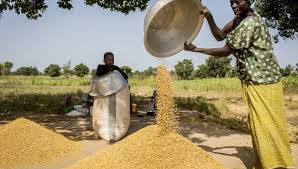 Ghana loses more than one tenth of its top four cereals produce to post-harvest losses (PHL) every year due to impediments along the entire value chain.

In 2014, the combined losses in rice, maize, millet and sorghum from the point of harvest to their retail/wholesale points at market centres were estimated at 337,932 tonnes – enough to feed almost one million Ghanaians, according to data on PHL sourced from research publications.

The data is compiled by the Africa Post-harvest Losses Information System (APHLIS), a private sector initiative that gathers conservative data on PHL in the sub-region from peer-reviewed journals for dissemination.

For years, agriculture has moved from a lucrative venture to a tiring profession that few people and institutions are willing to engage, invest and stay in.

The few still in the sector also complain of bearish incomes, rising costs of production and poor returns to investments.

A business development specialist and Chief Executive Officer of AgFocus, Mr Augustine Adongo, said part of the challenge was PHL.

“PHL has a direct effect on farmers’ revenue and consequentially, on their cost of production,” he said.

With profits in farming largely driven by volumes, not just prices, Mr Adongo, who advises on agribusiness and related issues, observed that losing some of the crops along the value chain directly affected profitability of the business and its returns on investments.

“If you are a commodity trader, every single kilo matters because those are profit margins that you are losing.

“That is part of the reason why the foreign investors are not rushing into agriculture in Ghana; they know this very well,” he said.

He blamed the challenge partly on poor infrastructure, which he said made it difficult for farmers to cart their produce and properly store them prior to sale.

One of the major challenges against agriculture as business in the continent, PHL is said to be costing Africa about 37 per cent of its total production, with various estimates showing that the figure rises to more than half of annual output in the case of perishable food crops.

A farmer and the Chief Executive Officer of the Chamber of Agribusiness Ghana, Mr Anthony Morrison, said the solutions to PHL in Ghana were “well known and easy” although the challenge persisted.

“We have always said that while we are talking about productive policies, make sure you bring on board post-harvest facilities to support the market-entry strategy,” he said.

Despite rolling out production enhancing programmes such as the Planting for Food and Jobs (PFJ) and other similar initiatives in the past, Mr Morrison said the country had failed to prioritise post-harvest management, resulting in a chunk of its produce wasting away.

“Combined harvesters for maize and other facilities are the things that farmers need. Also, we need to train our farmers in new food management strategies to help reduce these losses,” he added.

In January this year, the Economic Community of West African States (ECOWAS) honoured the government’s request to support the School Feeding Programme with 2,750 tonnes of cereals.

The support, which was to be replenished in three months’ time, comprised 1,000 tonnes of maize, 750 tonnes of white rice, 500 tonnes of millet and 500 tonnes of sorghum, the ECOWAS Commissioner for Agriculture, Environment and Water Resources, Mr Sekou Sangare, said at the time.

Using this as an example, a Senior Lecturer in the Agricultural Economics and Agribusiness Department in the University of Ghana, Dr John-Baptist Jatoe, said the deficit that occasioned the country’s request for the grain support could have been avoided if the challenges bedevilling PHL were addressed head-on.

“What we need to concentrate on is actual action, not talking because the National Buffer Stock Company needs to have real facilities to be able to store produce,” he said.

For a country striving to be beyond aid, Dr Jatoe said reducing PHL must be a national priority to help make the country food-sufficient and endear farming to many people.

He said experience had shown that the country mostly engaged in PHL researches and other activities only when such initiatives were instigated by donor projects.

But instead of using the findings to improve upon the challenge, he said little to no practical effort was put in to help reduce the canker.

With the crops subsector (excluding cocoa production) valued at GH¢17.86 billion in 2018, the value of last year’s PHL of about GH¢680.19 million means that about three per cent of the subsector was lost to the canker.

In relation to its peers, Ghana’s PHL rate is similar to its neighbours, according to the APHLIS data.

But like its neighbours, the data showed that the losses were more pronounced in maize, with annual estimates showing that about 18 per cent of total output was lost.

They were, however, least pervasive in millet. In that crop, the PHL rate was around 11.2 per cent over the 14-year period that the data covered.

While admitting that PHL was a concern to most African governments, Dr Bruno Tran of the APHLIS said PHL needed to be “a much more serious concern”.

“It does not make sense to lose any of this hard investment through losses after the growing season,” he said in an email response.

“Cereals and dried legumes losses are estimated to be about 10 to 15 per cent and this is a sizeable amount of human, financial and technological resources that is wasted,” he said.

In February this year, the African Union (AU) committed to reducing PHL by half before 2025, something Dr Tran said could be “technically achieved.”

Although encouraging, he said progress in member countries “has not always been very fast and not enough is documented.”

“Sub-Saharan countries lose produce they have already paid for growing. This is such a waste,” he said,

“By investing a little, comparatively, one can reduce the levels of loss and get back the produce they have already paid for. Mathematically, it seems a no-brainer to me and although some post-harvest loss mitigating solutions are expensive and difficult to implement, there are others that are cheap and simple,” he added.