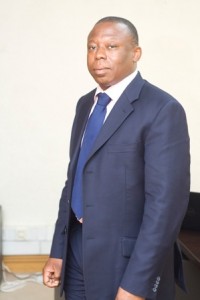 Peter Iliasu, Managing Director of Merchant Bank Ghana Limited, has made full circle in his professional banking career.  He has vibrant aspirations for the organization on which he cut his teeth—Merchant Bank.
“My vision is to grow the bank into a world-class bank like the HSBCs, the Citi Banks and the Credit Suisses; the best place for shareholders to invest; the best place for people to work; the best place to benchmark for regulators and the best place for customers to do business,” Mr. Iliasu said.
“I want to leave a bank that can easily compete with the multi-nationals with branches in West Africa; a solid trade bank,” he added.
Iliasu, has worked with four major banks in senior management positions for close to twenty years. He was appointed Managing Director of Merchant Bank, 2009. He joined the Merchant Bank, initially, as a Senior Investment Officer, was a Senior Relationship Manager at the Standard Chartered Bank, a Deputy Executive Director at the Barclays Bank and was the Executive Director at Fidelity Bank before he took the ManagingDirector portfolio at Merchant Bank.
How does Iliasu hope to accomplish his vision?  He hopes to use a three-pronged approach to achieve his vision: bringing in the right mix of people; setting up a very good customer service unit; strengthening the corporate investment unit of the bank he heads and entering into partnerships with other investment banks.
Iliasu believes he has picked up a unique mix of experiences to build the bigger picture he is envisioning. He catalogues his unique expertise as thorough client knowledge, ability to manage people, his multi-cultural experience and his ability to structure transactions.
About his ability to structure transactions, he says he is in the process of testing that ability by raising the bank’s balance sheet to fulfill the Bank of Ghana’s directive requirements.  One of his options includes a partnership with an international bank.
Iliasu states the kind of partner they are looking out for: “We are looking at a partner that will bring value to our balance sheet; one with good IT infrastructure and one who will give us referrals in terms of international business.”
Merchant Bank may be talking to some suitors and he gives clues: “It could be any of the international banks who do not have a presence here.”
According to Iliasu, Merchant Bank’s strongest selling points are its local knowledge and its infrastructure.

Born to a history lecturer and a politician of the Convention Peoples’ Party (CPP) stock –Dr. Alfred Iliasu, but for the money, he would have followed his father’s steps in academia.  Peter Illiasu studied history for his first and second degrees.  Although he did not follow his father to academia, he says he picked his ingenuity.  On whether he would follow his father’s other vocation – politics – in future, Iliasu would rather not give any clues.
For now, Iliasu has to use his ingenuity to meet his short-term targets.  He is aiming at 10 per cent of the total deposits market share by the end of this year. The bank has grown from 5.8 per cent to 6.1 per cent in the last three months with respect to total deposits.
Iliasu started off his primary education at the Datus Preparatory School in Bubuashie, Accra andcontinued his secondary education at the Tamale Secondary School. He studied at the University of Ghana and the University of Hull and is an Associate of the Chartered Institute of Bankers, UK and a fellow of the Chartered Institute of Bankers – Ghana.