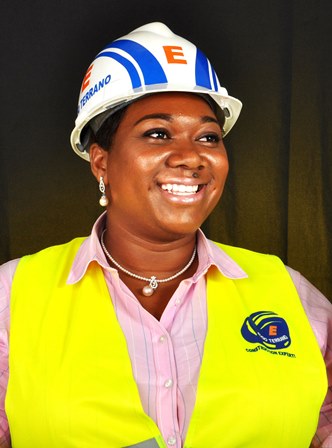 It has been just under a decade, since Ms. Eunice Ijeoma Aku Ogbugo, Founder and CEO of Eugo Terrano Limited, staunchly entered Ghana’s male dominated construction sector, but she has already gained recognition both for Business Excellence and as Female Personality at the 2012 edition of the annual National Youth Achievers Awards ceremony.

Now the soft-spoken but perceptibly gritty lady, barely in her early thirties, is looking to take another less travelled road in Ghana’s business environment; mentorship, which she hopes to elevate in the country’s corporate culture.
“It is primarily to help bridge the employee-employer gap and ultimately to help address the ever-challenging unemployment situation we have on hand,” said Eunice who believes that a formalized system of mentoring is the missing link between the country’s educational system and the job market.

She observes that, without knowing what they are going to use the knowledge they acquire in university to do, most graduates come out not fitting into the corporate world; they become frustrated and move on to do different courses hoping to enhance their employment opportunities. If they had mentors – people already doing well in corporate institutions or running their own businesses and using the knowledge they have to guide the youth while in school – they would come out better prepared for the job market.

“Mentoring indeed will also help to harness the energies of young people in the corporate world and in business to direct their paths so that they don’t make mistakes in their career choices and development,” Eunice opined.
So, as a construction person with some experience and recognition, Eunice is determined to leverage that in setting up a formalized system of mentorship for university undergraduates.

What is driving this new passion? The life-changing experience she had at the 8th Annual Fortune/State Department Global Women’s Mentoring Partnership, which ran from Monday, April 22 through Thursday, May 16, 2013, in the United States of America.

The Global Women’s Mentoring Partnership is a unique partnership between FORTUNE’s Most Powerful Women, the U.S. Department of State and Vital Voices, which pairs emerging leaders in business from around the world with top American female executives who serve as mentors.
“The programme was about making mentees better business persons, who will in turn become mentors themselves for other aspiring entrepreneurs.
“All they strongly harped on at the opening and closing ceremonies was the need to ‘pay it forward’” Eunice recollects.

“When you go through the programme you feel encouraged to give back to society. So, now I am much energized,” Eunice says with a calm but tenacious aura.
The drive is even stronger when, with the recognition as the Female Personality of the year, she has to serve not only as an inspiration to other women by her continuing success, but to practically hand-hold some into their own personal successes.

“You know, when it comes to practically leading other women into achieving their potential, mentoring is one of the surest and most effective means. Can you imagine what the impact would be on say a senior secondary school girl from a rural community being attached to my office and observing me in my field attire of hard helmet and boots supervising civil construction works in another remote community?

“That immediately is going to dismantle a lot of mental misconceptions about herself; that she cannot venture into areas perceived to be male reserves, let alone succeed at it. She also will have the opportunity of learning first-hand how to operate in a team and at whatever level in an organisation.”
“I have a foundation, the Eugo Foundation; it’s a construction company alright, but with strong corporate social responsibility, which will now be the vehicle for paying it forward. Initially I didn’t have mentoring as part of my CSR activities. It was mainly on interventions to help communities challenged by a lack of health and educational facilities, as well as youth and women empowerment, but after my experience at the programme in the US, I’m adding mentoring to the Foundation’s activities,” she explains.

Eunice Ogbugo reasons that when you build a facility, it serves a good purpose alright but it is just for that small community, however,if you succeed in mentoring just one person into successfully establishing a business, the impact is deeper, wider and more sustainable.
“So if we could get a number of successful and experienced individuals from the corporate and business spheres to volunteer as mentors, a lot of our young people would more easily be streamlined into the business and corporate world,” Eunice says.

She recollects how, as a young female just out of school she ventured into a male-dominated and arguably one of the most difficult business sectors. A mentor made the big difference in the early stages of her entrepreneurial life.

“I had a mentor, but not in the formalized manner I’m intending to do for young entrepreneurs now. I looked for a senior contractor and sat in his car for three weeks, doing his rounds with him and studying at close range how he went about his business.

She recounts hilariously how he would joke to his business acquaintances about her, a lady, not looking for some hair-dressing or other such perceived feminine business to do but wanting to become a contractor.
“He did that, but then he would also ask them to support me by subletting some of their contracts to me, and by so doing he introduced me to his business network.

“Indeed, he even guaranteed for me to take an overdraft from the bank to start my first project, because he already had a relationship with the bank and me as young person now venturing into business with no credit track record, I needed two guarantors to qualify for the overdraft facility.
“So in this case, my mentor created a way for me by his dealings with the bank. That of course gave me a head start.”

Eunice Ogbugo is clear about her intentions. She is looking at a partnership between Eugo Foundation and the Ghana Club 100, the Association of Ghana Industries and other business umbrella associations, the Ghana Investment Promotion Centre, all the state-owned and private universities, the polytechnics and the senior secondary schools, to organise a well-structured arrangement for mentoring.

“We should be able to get member companies of the Ghana Club 100, which incidentally is fashioned on the Forbes 500 model, to sign on and then go to the universities and even the senior high schools, and the District Assemblies to promote this concept.”

“In this new activity, it will be my responsibility to finance career fairs at the universities to recruit interns and mentees and post them to corporate organisations that have volunteered to participate in the mentoring programme. I see it more as my CSR activity.

“When it happens that way, I think the companies might be prepared to take on a lot more interns than they might have been taking, if they were doing that at all.
“And of course, everybody benefits, especially the participating companies as that enhances their CSR credentials. These are the sort of things that investors are looking out for in companies to partner with. That is what they call sustainability; the latest buzz word in business. That is one sure way your business can grow and be sustained by the community in which you’re working,” Eunice says.

But her greatest fulfillment would be in many of the mentees finding their way into their own businesses early in life. In a sense it would be reproducing her own kind.

“Eugo Terrano is a construction company I formed in 2005, just one year out of KNUST, where I read and graduated in civil engineering.
“Usually in school, you really don’t know what you want to do after graduation, so I was torn between two options; going abroad or staying in Ghana. Everybody was rushing for UK working visas or these internship programmes in the US which were posted all over university campuses towards times of graduation. These were things that people paid for but most often did not materialize,” she recollects.

As fate would have it, in mid-stream of university, she had the opportunity of travelling to and working in Europe and she discloses, “the experience was rather nasty; looking for jobs, you could not use your own name, you couldn’t go looking for a job that you’re qualified to do except cleaning and waiting jobs in restaurants.
“I also saw colleagues, who had been there for some time and were struggling to survive, though they were employed, they never seemed to be out of one form of stress or the other.”

That experience helped her decide against going abroad, even though she had a UK working visa.
“Fortunately for me, right after school, I attended a programme where inspirational speaker Emmanuel Dei-Tumi spoke about being in charge and taking control of one’s destiny and that if one wanted financial independence one had to be in business. He introduced his entrepreneurial school, which I later attended and learned how to start a business. It was more like a mentoring session because the lecturers were real life working people and not just academics. Lecturers like Albert Ocran of Legacy & Legacy, Rev. Ogbamey Tetteh of Databank and Caleb Ayiku of Engen Oil.

There, she learnt about book keeping, preparing and interpreting financial statements, business planning and company leadership.
“So that’s where I picked up the know-how to do business. I was meanwhile working with a construction company in Accra as a non-salaried person because they said they couldn’t employ me but I wanted the experience.

“I first started designing buildings for friends and relatives and taking a token for my efforts. By the end of six months of entrepreneurship school I had accumulated enough to register my business and that’s how I started,” she revealed.

For Eunice, it was a case of following after her passion right from the onset.
“I opted for construction because I love being in the field; unlike most civil engineers who prefer consultancy jobs and staying off the field. I was always attracted to foreign construction workers in their hard hats and jackets.

“I realised most of the construction companies in the country were foreign owned and not many Ghanaian firms were professionally run.
“So my idea was to form a construction company that would be local and big and run professionally like the big foreign firms. That’s the idea of Eugo Terrano; to provide professional, quality construction services in a timely manner, within the budgets of the client and to the specifications required. And those are the major considerations in construction; the people, quality, time and safety,” she explained self-assuredly.

Having tapped into the experience of other successful people, though largely informally, to create her own success, Eunice Ogbugo believes a formalized system of mentoring would help a lot more Ghanaian graduates of the tertiary and secondary institutionsbecome more self-aware, taking responsibility for their lives and directing their lives in the direction they decide, rather than leaving it to chance.