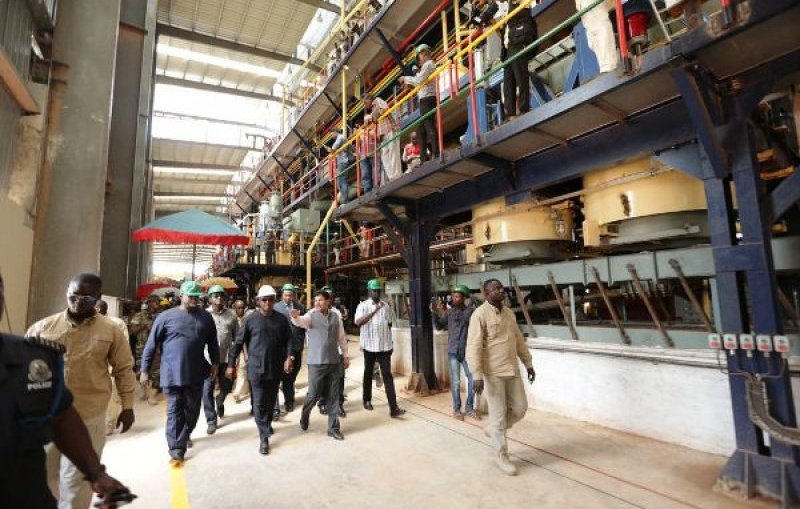 Structural maintenance works have started on the Komenda Sugar Development Factory in the Central Region following the signing of an agreement with the strategic investor, Park Agrotech Ghana Limited.

This follows Cabinet’s approval of Park Agrotech, a company incorporated in the agribusiness sector, as the preferred strategic investor to operate the factory.

The Minister of Trade and Industry, Mr Alan Kyerematen, told Parliament yesterday that the formal agreement had now been executed between Park Agrotech and the Komenda Sugar Development Company Limited.

He said “The agreement will be effective upon the completion of Conditions Precedent, which include the approval of the agreement by this august House. The required documentation will be brought before this House in due course,” he said.

“Hopefully, next month and a half,” he added

He was responding to a question by the Member of Parliament (MP) for Chereponi, Mr Samuel Abdulai Jabanyite, who asked the minister about the status of the Komenda Sugar Factory and efforts being made to operationalise the factory.

Addressing the question on the floor of Parliament yesterday, Mr Kyerematen said the company would begin a comprehensive programme of action to bring the factory to life as soon as restrictions on all foreign travels resulting from the COVID-19 pandemic were lifted and all relevant approvals had been secured.

He said the technical partners of the company would begin a comprehensive programme of action to bring the factory back to life, stressing: “This will bring prosperity to the people of Komenda and its adjourning communities.”

“Over the first three years of the agreement, Park Agrotech will invest $28 million in capital expenditure and working capital, including paying an annual concession fee of $3.3 million for a period of 15 years,” he explained.

Mr Kyerematen said the approval followed the successful completion of the competitive bid evaluation process by the transaction advisor, PricewaterhouseCoopers (PwC), and a recommendation made for the consideration by the his ministry and Cabinet.

That was after Park Agrotech had been identified as a strategic investor with the requisite technical and financial capacity to operate the factory efficiently and profitably, he said.

Per the agreement, he added, Park Agrotech would be working with STM Projects Limited, an India-based company that has extensive experience in the management and operations of sugar mills and plantations, both in India and other parts of the world.

“Mr Speaker, after a series of extensive stakeholder consultations, the National Sugar Policy was finally approved by Cabinet in October 2019.

“The approval of the Sugar Policy paved the way for the concessionaire to be formally introduced to the chiefs and elders of the Komenda Traditional Area in November 2019,” he said.

Responding to a question by the MP for Bole Bamboi, Mr Yussif Sulemana, on the procurement process his ministry went through before settling on Park Agrotech for the project, Mr Kyerematen said PwC followed and completed the process of identifying potential investors through the normal competitive bidding process, choosing Park Agrotech as the most preferred strategic investor.

Answering a question by the MP for North Tongu, Mr Samuel Okudzeto Ablakwa, on when specifically the agreement on the project would be brought before Parliament, the minister said: “It will be our pleasure to do this as soon as possible. Hopefully, next month and a half.”

The PwC told the Daily Graphic during a visit to the plant site last year that Park Agrotech was expected to invest $11 million of the amount in sugarcane cultivation, $6 million to upgrade plant and machinery and $11 million as working capital to bring the ailing factory back on its feet.

A total of 15 companies expressed interest in the factory, out of which five submitted bids to become the strategic partner.

STM Project Limited, which will serve as technical partner, is a company renowned for sugarcane development and sugar plant modernisation, expansion and rehabilitation for more than 200 sugar factories in India and other parts of the world.

The University of Cape Coast will provide technical support for the partners.

In 2016, the government secured a $35-million Export-Import (EXIM) Bank of India loan to set up the Komenda Sugar Factory.

An additional $24 million was set aside to support outgrower farmers.

The factory was inaugurated on May 31, 2016, amid pomp and ceremony, to produce sugar, but it became stillborn due to a multiplicity of factors that were described as “technical and operational challenges”.

For the past three years, the factory has been left to deteriorate.

A visit by the Daily Graphic to the factory in July last year showed that the harsh weather conditions and the salty breeze from the Atlantic Ocean that lies about three kilometres from the factory had triggered rapid corrosion of the metallic parts of machinery.

The Daily Graphic also observed that weeds had virtually taken over the premises, making it a haven for rodents and reptiles.

The rusty metallic parts of machines indicated that further delay in putting the factory to use could lead to additional cost in terms of repairs and replacement of those parts.

While addressing a durbar of the chiefs and the people of Komenda on September 14, last year, President Nana Addo Dankwa Akufo-Addo had given an assurance that the government was in the process of getting a strategic investor to revive the factory.