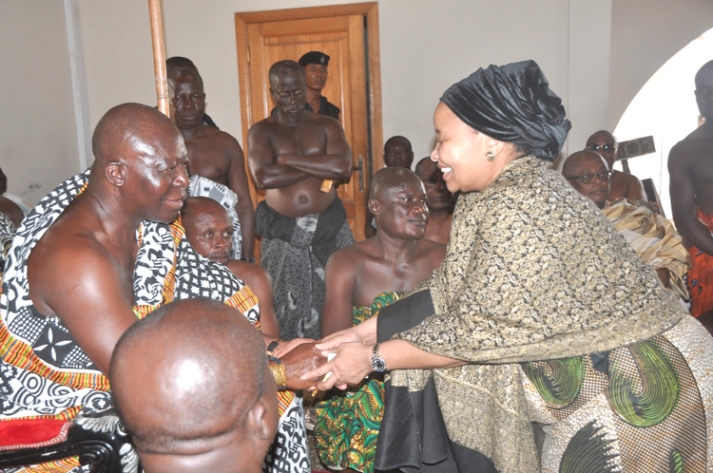 He wished them well and also commended them for attaining that feat.

Oheneba Agyemang Atweneboanda made the comments on behalf of Otumfuo Osei Tutu II when the South African High Commissioner to Ghana, Madam Lulama Xingwana, led a delegation of the management of the South African Airlines to introduce the new flights to the Asantehene.

The delegation also presented Otumfuo, who sat in state, with two Business Class tickets to cover Accra and Washington, a miniature SAA aircraft and other souvenirs at the Manhyia Palace in Kumasi.

In her short remarks, Madam Xingwana commended the Asantehene for patronising the SAA to other parts of the world, which they considered a very high and cherished endorsement of the quality service of the airline by the king.

She explained that the flight which was inaugurated on August 2, 2015 was available and ready to fly the king to Washington for him to meet with some of his subjects in that part of the world.

Explaining the new flights, Mrs Gloria Wilkinson Mensah said the flight marked 18th anniversary of SAA and was also in consonance with the Ghana government’s policy to make the Kotoka International Airport the aviation hub of West Africa.

She said the SAA was the only airline in Africa to offer such service to Washington.

According to her, the SSA flew to Washington four times a week: Mondays, Wednesdays, Fridays and Sundays.

She described the safety record of the SAA as the best on the continent, coupled with excellent services to its cherished customers.