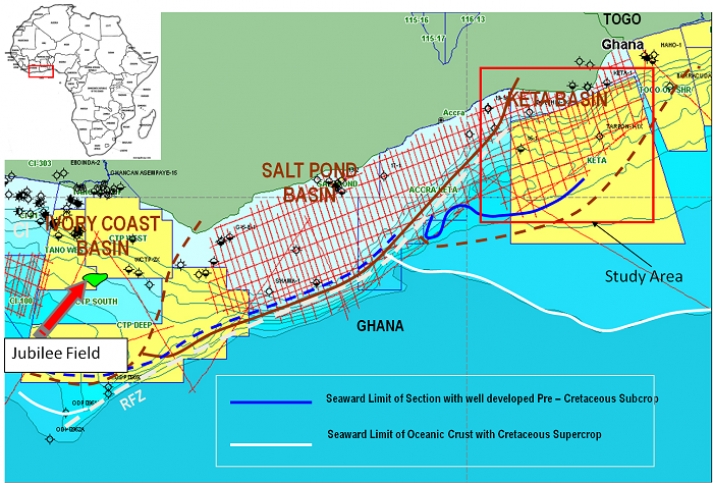 Homepage » Oil & Gas » No success yet in Keta Basin drilling

Exploring for oil and gas in the Keta Basin may take a longer time to yield successful results due to a combination of technical factors and lack of incentives.

Currently, only one exploration well has been drilled by ENI, which proved dry, although it costs more to explore within the Keta Basin waters because of the depth.

Industry experts have explained that the technicality and cost involved required the involvement of larger multinational oil companies such as Shell, Chevron, Exxon-Mobil and co and required juicier incentives to attract them to the area.

“It is more expensive to do exploration in the Keta Basin because it is deeper than the waters in Tano. But the government is approaching the negotiations with these large companies the same way as it did with companies that are currently producing and exploring in the Tano Basin,” an industry expert said.

According to the source, it would be proper for the government to use better incentives to attract oil production companies to venture into the Keta Basin waters.

The Keta Basin is part of the larger Voltaian Basin, which includes onshore areas stretching up to the northern parts of the country, where geological data indicate the possibility of oil formations. However, since those areas have not been de-risked, the government will have to make some concessions to petroleum exploration agreements to attract investors.

A popular hotel in the area has also been acquired by an investor who is currently renovating the facility to give it a facelift, possibly in readiness of the anticipated activities that would greet the place when there is a breakthrough in commercial discovery of oil and gas.

The GNPC is preparing to undertake a reconnaissance survey of the 104,000-square kilometre Voltaian Basin, covering about 40 per cent of the country’s land mass, to acquire data to ascertain its oil prospects.

The survey, estimated to cost $20 million, involves geological expeditions and the acquisition of Two Dimensional (2D) Seismic data to ascertain the oil potential of the basin for the purposes of attracting investors into its exploration.

The corporation is expected to drill six narrow holes to determine a hydrocarbon presence in the onshore Voltaian basin. The next step would be a full-scale seismic survey before the blocks can be divided up.

Before 2012, Tap-Oil Limited, Afex International and Challenger Minerals Incorporated, which signed an agreement with the Ghana National Petroleum Corporation (GNPC) to explore for oil and gas in the Keta Basin, were not successful due to the technical nature and the huge costs involved in drilling wells in offshore Keta basin.

“In terms of difference, the fiscal regime for this particular agreement is much better than the Kosmos and West Cape three points deep water tunnel agreements. This is an exploration and production agreement just like the jubilee one,” the GNPC had said.

The Acting Chief Executive Officer of the GNPC, Mr Alex Mould, stated last year that the corporation was holding talks with Royal Dutch Shell, Chevron and Exxon-Mobile over an exploration and production deal in the offshore East Keta basin.

“We are in discussions right now with Shell in the East Keta basin. We are also in discussions with Chevron. They are looking at where they want to come in the data room and we should hear from them in a couple of months,” Mr Mould told Reuters.

“We still have to make contacts with Exxon-Mobil and we believe that the advent of Shell, who are in discussions with us right now for a petroleum agreement, will encourage the rest of them to come in,” he said.

Ghana, which started producing oil in December 2010 in the offshore Jubilee field, has ramped up production to 100,000 barrels per day and is inching up to 120,000 barrels a day by early next year.

Oil currently constitutes about 1.3 per cent of the country’s GDP. Last year, the government spent an average of GH¢34 billion. Oil revenues amounting to close to a billion Ghana cedis went to support the budget.