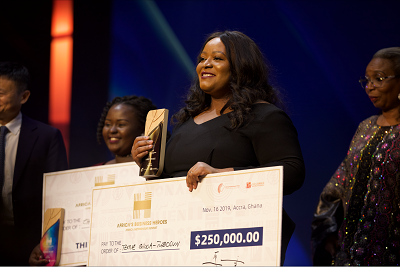 The startup founded in 2015, beat 10 other startups from across Africa to win a $250,000 stake of a total $1million prize at stake for the finalists.

On picking the final winner, billionaire Jack Ma said that he wanted to pick the business which had the most impact and was profitable.

Mrs Giwa-Tubosun told the panel that her business has been able to save lives of almost 6,000 people in Nigeria.

Speaking during a press conference after the event, Mrs Giwa-Tubosun expressed her gratitude towards the Jack Ma Foundation for awarding her the top prize and giving her the grant.

“I am really proud of my team who are back in Nigeria, right now as I sit here, my team is delivering blood to needy people in Nigeria,”

“This is validation for the critical work that we do and we are looking forward to expanding,” she said.

The second prize winner, Omar Shoukry Sakr, walked away with USD $150,000 for his business, Nawah Scientific, a private research centre in the Middle East and North Africa which is focused on natural and biomedical sciences.

“One of the biggest challenge is recognition in biotechnology and this is definitely an achievement and a vote of credibility that scientists have potential,” he said.

Omar said that his initiative was a testament to the fact that biotechnology is a profitable business and wished to see more scientists in next year’s round.

On her part, Ms Christelle Kwazera, 25, the youngest of the finalists, walked away with USD $100,000 for her startup Water Access Rwanda which tackles water scarcity and unemployment in Rwanda.

The ANPI was launched by the Jack Ma Foundation to support and inspire entrepreneurs across the African continent.

The ANPI will award US$1 million each year for the next 10 years in an annual pitch competition where the top 10 finalists will compete in a televised event to win their share of the prize money.

In its first year, the ANPI drew more than 10000 applicants from 50 countries across Africa.