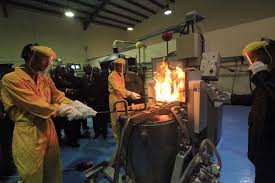 Newmont Mining Corp said on Monday that it would buy smaller rival Goldcorp Inc in a deal valued at $10 billion, creating the world’s biggest gold producer by output.

The deal is the second high-profile merger in the mining industry since Barrick Gold Corp agreed to buy Randgold Resources Ltd in September last year to cut costs.

The gold mining industry has come under fire from investors in recent months for poor management of capital. This combined with falling gold reserves and higher extraction costs have prompted miners to look for cost efficiencies.

“The strategic rationale for combining Goldcorp with Newmont is powerfully compelling on many levels,” Goldcorp Chief Executive Officer David Garofalo said in a statement.

Newmont will offer 0.3280 of its share and $0.02 for each Goldcorp share. Based on Newmont’s Friday close, that translates to $11.46 per share, a premium of about 18 percent to Goldcorp’s Friday close on the New York Stock Exchange.

The combined company’s reserves and resources will represent the largest in the gold sector and will be located in favorable mining jurisdictions in the Americas, Australia and Ghana, the companies said.

Goldcorp’s U.S.-listed shares were up 13 percent before the bell on Monday. Newmont Mining’s shares were down 2.6 percent.