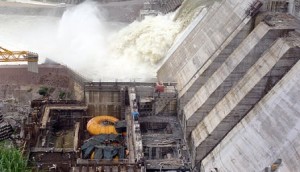 GRIDCo attributed the request to an “emergency shutdown of Bui units 1 and 2”.

The importance of Bui lies in its supporting role as a peaking plant that comes on-stream during peak hours to boost what is produced by the Volta River Authority, CENIT and Sunon Asogli power plants.

The VRA, which has a total installed capacity of 2,100 megawatts, generates about 1,600 megawatts of electricity every day. This is augmented by about 400 megawatts of combined generation from Bui, CENIT and Sunon Asogli.

The Bui project started in 2007 with a loan from the Chinese government but experienced a shortfall in project funding arising primarily from the unanticipated effects of the recent global economic crunch, unforeseen essential works, and inadequacy of budgetary allocations for some line items in the Engineering Procurement and Construction (EPC) contract.

Government however secured additional funding totalling US$168.4million from the Eximbank in China to complete the project.

Ghana, over the past two years, has had erratic changes in power supply. In recent months, the inadequate generation was attributed to the inconsistent flow of gas from gas fields in Nigeria via the West African Gas Pipeline and unavailability of some thermal plants.

Last week, power plants TP47, Cenit, Tico 2, Tapco 1 and part of Sonun Asogli’s generation were unavailable due to maintenance. This led to deeper power cuts countrywide as about 140 megawatts of load had to be shed to stabilise the system.

Meanwhile, parts of Accra and its environs were plunged into darkness following an explosion at the Dzorwulu substation of ECG around 7:30pm on Wednesday evening.

Checks reveal that Achimota, Dzorwulu, Osu, Adenta, Madina, parts of Kasoa, Abeka and Tema are the most affected areas

Head of Public Relations at GRIDCo, Albert Quainoo, was unable to tell exactly when the lights will be restored

He explained that a technical problem with one of the power lines feeding into the substation at Dzorwulu had been the cause of Wednesday evening’s explosion.

He said due to the fault, GRIDCo is able to transmit only 54MW of power as against over 200MW needed for Accra alone.