Homepage » Business Leaders » Manufacturing for West Africa Against The Odds 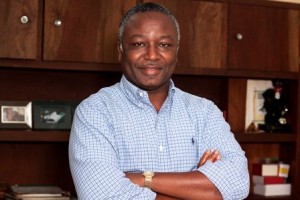 Raphael Felli, always with an eye for business opportunities, entered Ghana’s manufacturing sector on the promise of the huge American market presented by the African Growth and Opportunity Act (AGOA). He heavily invested in machinery and a factory that produced socks for the American market.

It, however, didn’t take long for him to be hit by the numerous challenges hobbling Ghana’s manufacturing sector. In his case, it was chiefly the erratic and poor quality delivery of electric energy that raised his production costs to unsustainable levels, not to mention consistent damages to sensitive equipment.

Ever the alert entrepreneur, who exudes a quiet but undeniable aura of patriotism, Felli was quick to spot an opportunity in his predicament.

“The whole country was burdened by our poor energy situation and there were strenuous efforts at energy conservation and energy use efficiency. Government had a programme to scrap the use of incandescent bulbs to be replaced with highly efficient compact fluorescent lamps (CFLs).

“Six million lamps were being distributed free by government and that was where we saw an opportunity; manufacturing CFLs here made economic sense because a huge market had been created by the new government policy,” Felli said.

He quickly transformed part of his garment factory floor into a manufacturing base for CFLs, while shipping out some of the garment machines to factories in other countries that were relatively competitive.

Here too, however, Felli is realising that the domestic market is really restricted, not because it doesn’t exist but more because of government’s uncanny apathy to domestic manufacturing, despite all the rhetoric to the contrary.

Wellamp now has distributorship in over five of Ghana’s 10 regions and also exports to neighbouring Benin and Togo.
“It’s been great, but there is not a steady market out there; you would have wished you were growing faster. What has arrested smooth growth has been costs; the outcome of high bank charges for credit and the intermittent power supply and high cost of energy, among other challenges.
“The other thing is people don’t pay. They want to buy, but they will buy on credit and will not pay on time so that you can turn around. When you buy raw materials, they don’t give you credit so that also makes for a lot of downtime in between production.

“We would have wished to be doing 10% of the market and because of these challenges we would have wished government would buy some of these light bulbs from us so that we know that there is at least a cushion from the competition from imports that are allowed in unfettered.
Though there has, in recent times, been much talk about government using its procurement processes to support domestic manufacturers against obvious dumping of inferior products on the local market, which is hampering the growth of local manufacturing enterprises, Felli thinks what is said for public consumption is still far from the reality.

But his optimism will not wane.
“Ghana is still the best place in West Africa to do business. The country is blessed with a critical mass of entrepreneurs. The average Ghanaian worker is sharp and readily learns and uses new technology.

“If the Ghanaian governments could overcome its their myopic and parochial outlook, the private sector through massive manufacturing targeted at the West African market, could easily transform the country into a major business hub within a decade,” Felli said.

“I understand some of government’s predicament, because those who import are also Ghanaians who have families and dependents, but of course they are not producing here and not helping to create as much employment opportunities as manufacturers do.

“But I’m also a bit ambivalent about doing business with government. We did a small project for government, under AESL (Architectural and Engineering Services Limited) where our light bulbs were to be used for lighting in a number of schools.
“We had to clear numerous hurdles. First, the headmasters and District Assemblies had their own plans about where to source for light bulbs. Secondly, when we finished the job, the hoops we had to go through to process for payment; from the headmasters to the District, and then Regional Administration, to AESL, then back to the Ministry of Education. Eventually it took about three years for payment to be made” Felli disclosed.

The only good news about supplying government, he thinks, is that eventually you get paid. So it will be good, at least, to have some percentage of your products being delivered to government as a cushion; a sort of insurance.

“In addition to prompt payments, what local manufacturers are asking for is not for government to buy everything from us, but it would be good for government to say, for instance, for this region we’re buying 10% of manufactured items required in our projects from local sources; and then proceeding to give domestic manufacturers quality specifications and delivery timelines to meet.

“Government could, for instance, decide to procure 10% of its total light bulb requirements from domestic manufacturers,” Felli said.

Importation of CFLs has been growing significantly since 2008, following government’s ban on the importation and sale of incandescent bulbs. Data available shows the 2008 figure was 14.8 million pieces, increasing to 20 million the following year and rising to 35 million in 2010.

“If government did that and it comes out that if you produced locally, government would take a chunk out of your total output thereby making domestic manufacturing lucrative, many of the importers would now decide to manufacture locally.

“I don’t like competition; but if I do, that means it helps my business,” Felli said.

He reckons that many people manufacturing the same product locally comes with advantages of economies of scale, where for instance, because of the increased volumes of a particular imported raw material in the production process, another entrepreneur decides to produce it locally to supply the industry.

“If that happened, it would save me the need to procure raw materials with foreign exchange and the attendant downside risks of foreign exchange fluctuations that often plague us domestic manufacturers.

“It’s the prudent thing to do because, at least, we do employ local labour thereby supporting families even as we help conserve foreign exchange used in importation of finished products.
“The other added advantage to government is that, with increasing domestic production, implementation of quality standards would be more effective,” Felli said.

He reasons that because importers engage in their businesses for profit and would therefore always seek to buy the cheapest products and sell for profit, quality standards are oftentimes compromised; especially given the situation of the Customs Excise and Preventive Service (CEPS), where their function has increasingly tilted towards more revenue mobilization, coupled with the country’s porous borders that allow for the smuggling in of inferior products.

“The other thing that I find ridiculous is that, if you bring a finished energy saving light bulb to Ghana, you don’t pay duty. If we bring our raw material to produce light bulbs, we pay duty, so in essence government is not giving us the enticement to produce here.
“If you complain, they say you could use that component part to produce something else, but in any case, if we were producing something else, that something should be out there in the market,” Felli said.
The domestic market obviously has great potential for Wellamp’s products, but the sub-regional market offers even bigger opportunity, as West Africa is the most notoriously energy deficient region in the world and ironically, is also among the world’s regions with the highest energy consumption per unit of production, according to the World Bank.
“We have government officials and private sector operators visiting our factory from Nigeria, Guinea, Togo, Benin and other West African countries who acknowledge Ghana is doing great.

“It’s all for the good name of Ghana, but if they come and our own government and people are not patronising our products, then of course, it becomes difficult for us to go to them and say buy from us,” Felli points out.

But intra-West African trade is fraught with debilitating bottlenecks which require pro-active government involvement if the burgeoning Ghanaian private sector is to capitalize on the huge market.

“One challenge with the sub-regional market is that, even though we have the ECOWAS Brown Card and all of that, intended to help exporters surmount some of the administrative bottlenecks, it doesn’t really work.

“But the governments talk without actually doing what they say. If you go for the ECOWAS Brown Card, for instance, the questionnaire is so complex you have to hire ex-employees of the Secretariat to help you fill it out.

“The ECOWAS Secretariat meets once a year, so when you fill out the form and there are parts to clarify on your form, it takes another year for it to be considered. It is thus more of a hindrance than a facilitator of trade,” Felli disclosed.

“Another challenge is the underdeveloped trade infrastructure. To ship from Tema to next door Nigeria or the Ivory Coast, it takes about a month. To go by road, which takes a shorter time, unofficial charges at the various check points and border posts make it cheaper to ship; but there is no direct shipping between the sub-regional countries, making it necessary to hop through several ports hence the long time it takes. Indeed, it takes about the same time to ship from Tema to Lagos as it takes to ship from Kenya or say China to Nigeria,” said Felli.

He reckons that if ECOWAS countries were able to open up direct shipping, trade would increase a tremendous fold and manufacturing in the sub-region could easily compete with other emerging manufacturing hubs around the world.“So generally, the market is there but there are too many barriers, too many hurdles. However, the sheer size of the market alone is enough enticement for us to continue doing what we know best. 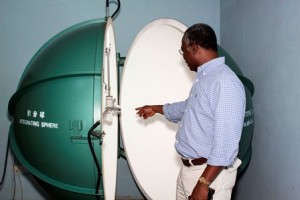 “We’ve put everything we got into this company. With the current global situation on our side, if we had a strong and proactive government to boot, we couldn’t ask for anything better. Wellamp would simply overwhelm the sub-regional market,” the chief executive concludes.