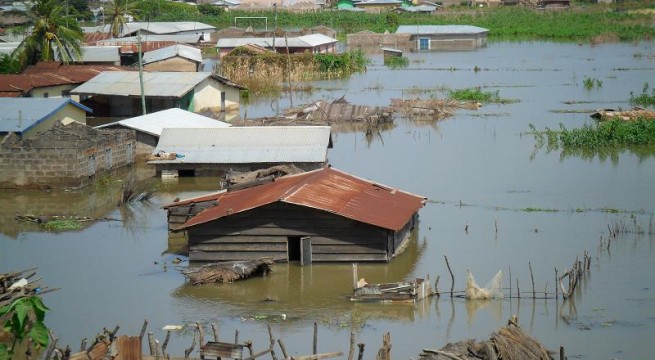 With Ghana in the middle of yet another heavy rain season, there are calls for a new approach to stop Ghanaians from building homes in flood prone areas.

Real Estate Developer Newmoncreek believes that the country needs to get rid of the notion that sand bags can prevent homes from being flooded and instead adopt a radically different approach.

The call comes as a new survey reveals that one in three home owners are unaware whether their home is on a flood plain or not.

Almost 3,000 homes a year are built on floodplains, with an average of one new home in every 14 constructed on land that has a significant chance of flooding, either from a river or the lack of a drainage system or from a heavy downpour of rain.

Dominic A. Monney, Managing Director of Newmoncreek Properties Limited says that most home owners don’t adhere to construction laws of the country and that flood prevention should be at the core of construction on floodplains. ‘We can’t go on treating flooding as an afterthought. Instead, we should be building properties which are specifically designed to rise and fall with the flood water. The technology is already available out there, all we have to do is make the best use of it,’ he explained.

Recent Metropolitan Office figures revealed that June 2015 was one of the wettest months ever recorded in Ghana, with almost twice the amount of average rainfall in more storms than have ever hit the country.

“Rain will always fall and water will always rise. And with annual rainfall set to continue, even areas not currently at risk may become vulnerable to flooding in the future,’ said Dominic.

‘These new construction methods mean that we can help develop floodplain sites, in the certain knowledge that future owners won’t experience the sort of devastation from flooding that we’ve already seen in some parts of the country especially Accra,’ he added.

Meanwhile, a recent survey suggests that 35% of home owners are unaware whether their home is at risk of flooding and 21% confessed they would have no idea how to tackle it if their home was to flood, with 14% even admitting to not knowing which emergency service they should contact should it happen.

Some 27% struggled to list more than three ways to minimise the impact of flooding on their homes and possessions and 16% admitted to having researched how to put flooding plans in place over the last 12 months and 9% hadn’t looked into protecting their home as they believe it wouldn’t happen to them.

‘Following the recent devastation and damage we have seen occurring across most parts of the capital as a result of flooding it’s surprising how many are still in the dark about the flooding risk to their homes,’ said Sandra Moore, the firm’s marketing manager.

‘Measures to protect, prevent and resolve flood damage are often simple, but in times of distress and panic they can be forgotten, so it is important that people are prepared and clear on what to do should the worst happen,’ she added.