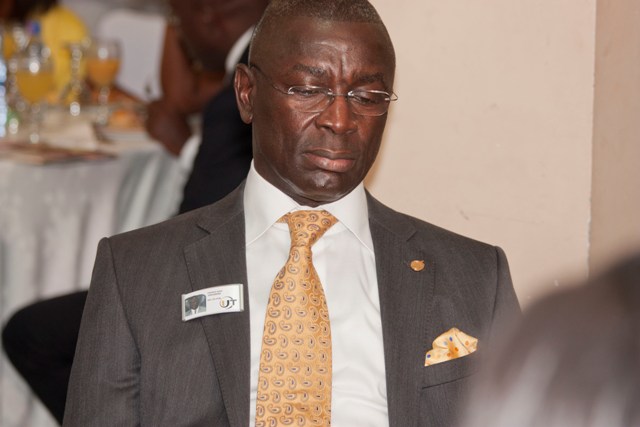 The Attorney -General (A-G) has filed new charges at the Accra High Court against Prince Kofi Amoabeng, the founder of the defunct UTBank, over the collapse of the bank.

The charge sheet filed at the Accra High Court Wednesday named as accused persons, Dr Johnson Asiama; a former 2nd Deputy Governor of the Bank of Ghana (BoG), Raymond Amanfu; a former Head of the Banking Supervision Division (BSD) of the BoG, Catherine Johnson; Head of Treasury of the UTBank, Robert Kwesi Armah; General Manager of Corporate Banking of UT Bank and UT Holdings; the parent company of UT Bank.

Prosecutor, ASP Emmanuel Nyamekye told the Accra Circuit Court that the state intends to file fresh charges against him in the High Court. To this effect, trial judge, Emmanuel Essandoh, discharged the accused.

In fresh action, the state slapped new charges on the UT founder and five others.

According to the state, by an agreement dated November 1, 2013, UT granted a credit facility of $15 million to Lushann International Energy Ghana Ltd (Lushann) for the purchase of crude oil to be supplied to Petraco Oil Company (Petraco) by Lushann. As security for the facility, Lushann assigned the stock to UT.

n furtherance of the supply of the crude oil to Petraco, Lushann chartered a vessel called Olympic Faith owned by Melville Enterprises SA (Melville), a Liberian company which was contracted by Lushann to receive the crude oil for onward delivery to Petraco.

On January 14, 2014, Melville issued a Writ of Summons out of the Registry of the High Court, Accra, against Lushann claiming the sum of $6,775,269.90 as unpaid fees for the charter of Olympic Faith.

UT applied to join the suit as an interested party to contest Melville’s claim to the cargo under a Stock Assignment Agreement.

By an order dated January 27, 2014, the High Court directed that the cargo be sold and $7million out of the proceeds deposited in an escrow account with UT in the name of the Registrar of the High Court at an interest rate of 2% per annum pending the final determination of the matter.

The state said a letter dated February 21, 2014, addressed to the Registrar of the High Court and under the hands of the 4th accused person and Gwendy Miranda Bannerman, the Head of the Legal Department of UT, confirmed the opening of the account and the payment of the sum of $7 million into the account as ordered by the Court.

Subsequently, UT submitted to the Registrar a statement of account and purported details of a call investment signed by the 5th and 6th accused persons and one Stephen Azumah which turned out to be false.

Investigations revealed that even though the 4th, 5th and 6th accused persons knew there was no money in the account they deliberately persisted in submitting false statements to the Registrar.

On August 14, 2017, the central bank revoked the operating licence of UT for violating banking laws and subsequently went into receivership. Investigations conducted in the course of the receivership of UT revealed that investments totalling GHC51,334,387.08 and $8,799,917 placed with UT by some 15 companies, had been transferred to UT Holdings, by UT without the knowledge and or consent of the companies.

It was established that UT Holdings did not have a licence to take deposits and investments. By a letter dated April 28, 2016, UT requested additional liquidity support in the sum of ¢650 million from BoG.

Upon the recommendations of Mr Amafu, Mr Asiama approved an unsecured liquidity support facility of ¢460 million without following prescribed mandatory statutory conditions. No payment was made for the facility.

Again, upon the recommendation of the Mr Ama, Mr Asiama without following prescribed mandatory statutory conditions, gave approval for single obligor waiver in respect of Letters of Credit previously granted by UT to its customers.

According to the state, out of the BoG liquidity support of ¢460 million, ¢413.09 million remains due to the central bank.

Based on these facts, the accused persons have been arraigned before the High Court for trial.