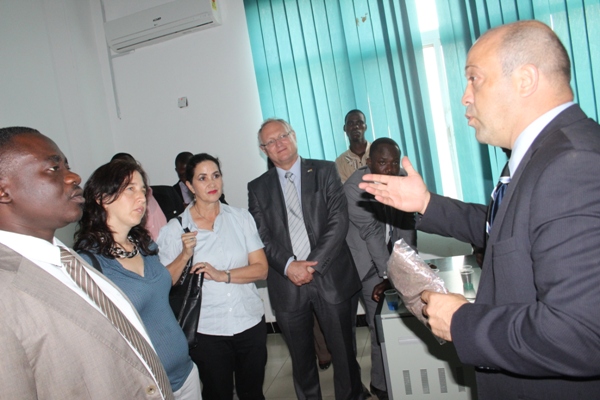 He explained that Ghana has a lot of potentials and companies in Israel are willing to invest in the country especially in the environment sector.

Ambassador Ami Mehl observed that environmental sanitation continues to be a major problem for many countries including Ghana.

He however commended Ghana for identifying the problem and instituting innovative measures at solving it.

The Ambassador was speaking to the media after a familiarization tour of the Accra Compost and Recycling plant.

The Ambassador who was in the company of his wife and other dignitaries from the Israeli Embassy toured of the facility to get a first-hand knowledge on the operations of the company.

The visit to the compost and recycling plant also afforded the Ambassador and his entourage the opportunity to understand the contribution of ACARP to the overall waste management process jn selected MMDA’s in Greater Accra.

Construction works are also far advanced on a state-of-the-art faecal waste treatment which is expected to be commissioned by end of 2015.

The faecal waste plant when completed, according to the Managing Director of ACARP Dr. Richard Amponsah, will receive over 1,000m3 (100 trucks) liquid waste from various MMDAs which would have otherwise be discharged directly into the sea.

The strategic project would assist in addressing sanitary related diseases such as cholera, dysentery, typhoid, etc.

According to the Managing Director of ACARP Dr. Richard Amponsah the faecal waste plant project is expected to generate about two hundred (200) additional Jobs.

He also revealed the company’s plans of producing waste bins and recreational furniture from the recovered plastics from the waste stream of the municipal solid waste received at the site.

Dr. Amponsah intimated that a country is said to be developed when it has the capacity to manage its waste.

He therefore appealed to government to support by establishing waste treatment plants across the country.

The Israeli Ambassador H.E. Ami Mehl appreciated the innovation with which the company was managing waste in the capital.

He explained that Israel has state of the art technology and is prepared to engage companies such as ACARP in technology transfer.

He explained that the situation in Ghana is not as bad as is being painted; saying that with the appropriate technology and right investments waste management challenges will be a thing of the past.