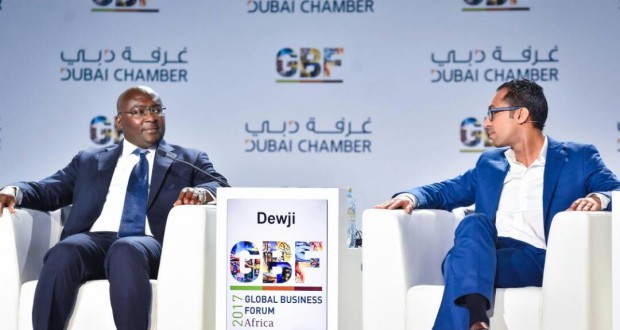 The international business community has expressed confidence in the set of economic measures being currently executed to close the industrialisation gap in Ghana.

Endorsing Ghana’s new measures Mohammed Dewji, President of METL group, a Tanzanian Conglomerate, said he is confident the new leaders on the continent of Africa, including the Ghanaian leadership, “have become far more serious with industrialisation” and expressed confidence that 10 years from now, “we will see a transformed Ghana and Africa.”

“I believe now governments and the new leadership have become far more serious and they’re addressing the core problems and I’m confident that in the next ten years we will not be addressing a lot of these issues again. I think they will be sorted out,” Dewji, who owns 41 businesses, stated.

He was responding to a presentation by Ghana’s Vice President, Alhaji Dr Mahamudu Bawumia, on the structural and economic reforms being implemented by the Nana Akufo-Addo government to formalise Ghana’s economy and place the West African country on a path of rapid industrialisation, at the Global Business Forum Africa taking place in Dubai, UAE.

Speaking on the topic “Industrialisation- the path to growth”, Dr Bawumia outlined the rationale behind Ghana’s industrialisation push, emphasising that the time for talking was over.

“We’ve got to do the things that have to be done. I am confident about what is happening on the continent. What I see happening on the continent and in my own country are efforts to address the problems. For instance, we said, ‘we’ve talked about the railway problem for the longest time, let’s just do it.’ And we’ve started to do it. We’ve even appointed a Minister in charge of Railways in particular to get it done.

“We’ve got an Industrialisation strategy that is also learning from the mistakes of the past, to avoid those mistakes. We are moving on a new trajectory and we are hoping that in the next ten years we see this whole industrialisation take off. But we have to work hard at it.

“If you look at history, it tells you that industrialisation, in whatever form it takes, is the way to go, and we are working at it.”

The 2017 edition of the Global Business Forum on Africa was organized by the Dubai Chamber of Commerce and Industry under the theme “Next Generation Africa.”.

The high-profile event, held under the patronage of H.H. Sheikh Mohammed bin Rashid Al Maktoum, Vice President and Prime Minister of the UAE and Ruler of Dubai, explores new opportunities to enhance economic cooperation and expand trade and investment ties between the Middle East and Africa.

The two-day forum features a total of 24 sessions that will involve the participation of heads of state, ministers and dignitaries, policymakers, CEOs, prominent entrepreneurs, and heads of private banks, as well as UAE government and business leaders.

Credit: Office of the President