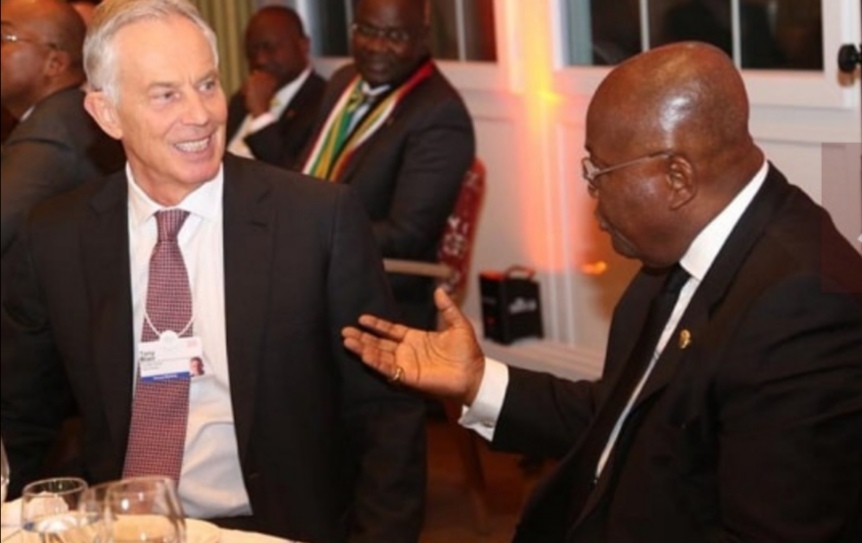 A former British Prime Minister, Mr Tony Blair, has passed a vote of confidence in Ghana and called on global investment players to invest in the country.

He said with President Nana Addo Dankwa Akufo-Addo’s excellent leadership, the country was showing great determination to succeed and was doing the right things

“I scarcely come across a leader with clarity of vision and determination to succeed and someone so much into the instincts of his people. So thank you for your leadership skills,” he declared.

Mr Blair, who was the Prime Minister of the United Kingdom from 1997 to 2007, made the remarks as a guest speaker at Ghana’s investment promotion dinner held on the sidelines of the World Economic Forum (WEF) in Davos, Switzerland last Wednesday.

The dinner, which was hosted by Ghana’s delegation to the WEF, led by President Akufo-Addo, was attended by chief executive officers of international businesses, investment and financial firms and global celebrities, including Wesley Snipes.

Mr Blair said anytime he interacted with people around the world, there was a sense that Ghana was on the move and people would want to be part of the success story because the country had created an environment full of confidence.

He noted that the changes that had taken place in Ghana had produced strong growth, which had made it one of the fastest-growing economies in Africa and the world.

He explained that his optimism about Ghana stemmed from the good reason that the country was enjoying stability and endowed with a real sense of opportunity and expressed the hope that if the stability and the current policies continued, the future would be very bright.

Mr Blair spoke highly about the Ghana Beyond Aid concept, saying it meant that even though the country was happy and proud about its partnership with the rest of the world, it had realised that Ghanaians must be the ones to decide their own future and by their own methods.

He said the ‘Year of Return’ was an amazing thing which attracted about 750,000 people, including distinguished Ghanaians in the Diaspora who had even come to Davos, and others who had made great contributions to the development of Britain.

The former British Premier described young Ghanaians as “immensely great people to be around with”, especially with their resolve and audacity to be part of the advancing technology sector that was thriving in the country.

Mr Blair said when he was in office, Ghana was beset with problems, events and crisis, but one thing that was thrilling and exciting was that when you step out of office, you were able to take a detached and objective view of countries.

He said with that, one could see such countries from the outside perspective, and that looking at the continent of Africa as a whole, even though the challenges were formidable, “I think there is a real sense that the coming decades will be the decades for Africa”.

Ghana’s Minister of Foreign Affairs and Regional Integration, Ms Shirley Ayorkor Botchwey, said the country was the gateway to the West African and the African markets and assured the investors that aside from the protection of their investments, they would also have access to those markets.

She said the Economic Community of West African States (ECOWAS) had a population of more than 300 million, with the African Union boasting a market of over 1.2 billion people.