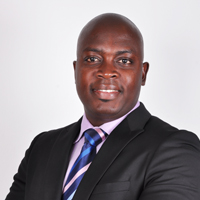 Turning down a scholarship to pursue a Master’s degree programme in one of Ghana’s most prestigious Universities in favour of hunting for a place in a harsh Ghanaian job market might seem an absurd decision for any young graduate to take. For Andrew Ackah though, who in spite of constant appeals from his lecturers decided to enter the hostile job market, the lure of the business world was irresistible and he got stuck in to, as he puts it, “feel how the business world works”.

Andrew is daring, creative and of course refuses to accept the roles that society foists on him. If fate had had its way, he would have been a lecturer, but he dreads churning out cold printed theories of scholars to people instead of engaging in practicalities.  Armed with these traits, it is unsurprising that he fills so aptly a position that  everyone would have recommended a typical marketer to fill. Tag him as a paragon of practical, innovative thinking and you might not be far from right.

A former student of St.Augustine’s College, Andrew pursued a degree programme at the Kwame Nkrumah University of Science and Technology and successfully graduated with a combined major in Economics and Geography. He then served as a Teaching Assistant in that same institution before doing the ‘unthinkable’, rejecting a scholarship offer to do a Master’s Programme in the prestigious University. He took this decision fully aware of the consequences but as someone who “loves to stimulate his thinking” and dreams when others will be snoring. He knew he could do something with his creative skills instead of being bored to death by “book knowledge”.

First, in drawing up an advertising/marketing strategy, being aware of the demographics of the target market is very crucial. They term it segmentation— the first of the three marketing strategies.

This, combined effectively with Andrew’s unquenchable thirst to always set the pace, has spurred him on, helping to increase MediaCom’s core business from four , when he joined in 2007 to thirteen  and earning the company arguably the biggest chunk of the advertising market with big corporate bodies like MTN, Guiness, Shell Ghana, Cadbury and Turkish Airlines on its client list.

As the General Manager, Andrew has set himself the vision to guide MediaCom to maintain its status as the number one media planning/buying house powered by innovation.

MediaCom, a Platinum Member of the Advertisers’ Association of Ghana, and a member of the MediaCom Group Worldwide which operates in over 90 countries with over 110 offices, is not resting on it oars because as Andrew puts it “being at the top does not mean being satisfied.” It thus strives to always be on top by being innovative enough to distinguish itself from the bland and the lazy even in the face of challenges like the lack of reliable research or database and the absence of laid down laws to regulate the industry.

Andrew humbly shares his success at MediaCom with his “fantastic team” at the office and the chairman of the company, Mr. Torgbor Mensah (Mr. T) who doubles as the head of the Argon Group of Companies and who he describes as “being an incredible inspiration to the team.”

So what do General Managers do in their leisure periods?

Andrew would not answer for every GM but gives us a bird’s eye-view into their lives: they play basketball and hang-out with friends on weekends. And as he puts it “the corporate world’s survival partly depends on building acquaintance” so “hanging” out is really important.

“Ivy,” he says without hesitation; Ivy being the proverbial woman behind Andrew’s phenomenal success. They have two lovely kids, both girls.

Now sitting in his cozy office and overseeing the affairs of the number one media planning/buying house in Ghana which doubles as the head of the MediaCom West Africa hub, comprising Senegal, Ivory Coast, Benin, and Togo, Andrew’s decision to turn down a scholarship offer in favour of an adventurous life in the business world seems vindicated. Of course, he has once again gotten the opportunity to further his education, pursuing an Executive MBA at the University of Ghana, though not on scholarship.