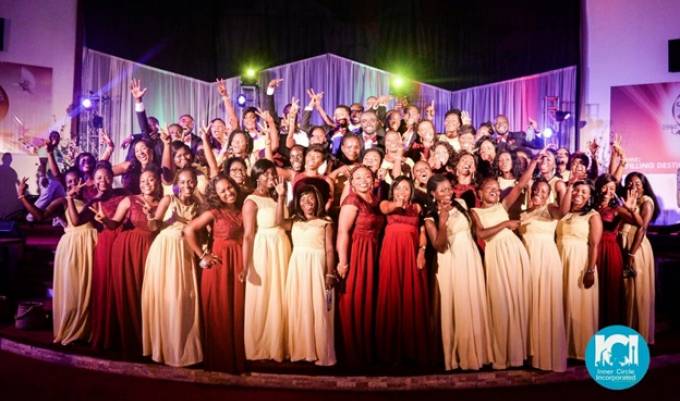 The Heavens will clearly have shaken given the glorious thanksgiving and song ministration that was on offer on the night to celebrate 15 years of Inner Circle Incorporated’s (ICI) ministry.

From patrons to artistes who started to fill the Grace Chapel auditorium in Accra, as early as 3pm, were served with electrifying performances from the Pipers, Minister Theo, Willie Coleman among others.

ICI, the cynosure of all eyes equally put up a show with their electrifying performances on the night, perhaps what also caught the attention was their authentic kente African wear which sparkled the stage.

Songs such as ‘Oye Nyame Ye and ‘His Faithfulness’ which they did alongside the Pipers brought down the house.

However, Pastor Helen Yawson from KICC, who was billed as the guest artiste did not disappoint as she clearly thrilled patrons with her powerful vocals and song choices.

She opened with ‘How Great is our Lord’ and subsequently did close to six songs after getting the audience in the mood for worship and excited as well.

Despite a celebratory night, a somber moment adorned the event, when the entire audience in the auditorium observed a minute’s silence for the late gospel musician Danny Nettey.

According to organisers, he was one of the ‘pillars’ of the choral group and that they owe it to him to remember him even in his demise.

Aside the praise and worship, special individuals were awarded for their contributions and support to the course of ICI, such as the head pastor and founder of Grace Chapel International, Wisdom Defeamakpor and the brain behind the group, Justice Amoah.

Each person received a plaque and a citation read on their behalf.

Given the fun filled event, some patrons indicated that they will be looking forward to next year’s event.

“I was really overwhelmed by the performances and the songs. It’s awesome to be in God’s presence,” Genevieve, a member of GCI said.

Samuel Mensah, a leading member of the group explains that the main idea behind this year’s event was to mark fifteen years in ministry and that “we are looking forward to growing deeper in the lord through song ministration and also engaging in more charitable works for society,” he said.