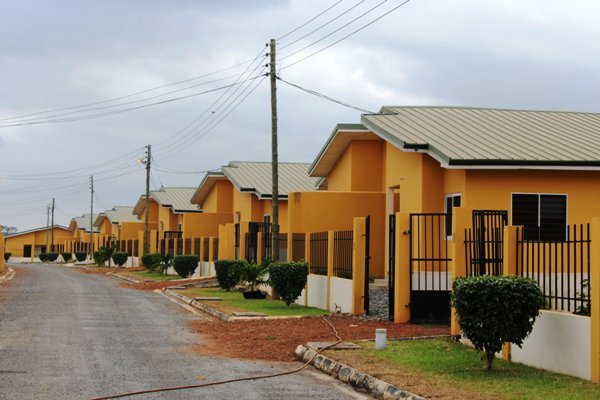 The Managing Director of HFC Boafo, Kofi Agyenim Boateng has stated that Ghana’s housing deficit has been overestimated prompting calls for a comprehensive data on the country’s housing situation.

The comments, which is set to elicit outrage among hundreds of thousands of home seekers in the country, comes as policymakers struggle to implement sustainable measures to meet the increasing demand for housing.

According to him, culture factors such as people moving to urban centres and not having places to sleep ‘does not mean that they don’t have rooms at their hometowns’, which Mr. Boateng noted, in most cases is not factored into housing statistics, hence the high deficit.

“I am not a researcher but I find cultural issues in our housing problems. We come from one place and we live in another place.Somebody from Kumasi lives in Accra where they are renting but has got a house in Kumasi. This may not portray the real picture.

So this is one of the problems we have but this is not to say that the housing problem is not real.

It might be exaggerated but it is still there and there is the need for us to also assist in building not just houses but quality structures,” he explained.

Mr. Agyenim Boateng made these comments in an interview in Accra, on the side-lines of a roundtable meeting organised by Citi  FM and GIZ, themed ‘My home – your business: the business case for affordable housing,’ to discuss the way forward to providing affordable housing that meets the income brackets of all Ghanaians.

Over the past decade, demand for housing has far outstripped supply as concerns rise about the widening housing deficit estimated at about 1.7 million, which is projected to reach 1.9million by 2019 if not addressed.

Official organizations- such as the Ministry of Water Resources, Works and Housing as well as the Ghana Real Estate Developers Association- which represents the interest of real estate developers in the country, tend not to keep data on the up-to-date need for housing in Ghana.

But anecdotal evidence suggests that current annual demand for home units is about 150,000 units.

On the supply side, all efforts by developers put together hardly add up to 70,000 units annually on the average, leaving an annual shortfall of about 80,000 units.

This is in spite of the purported 60% increase in the number of houses in the country between 2000 and 2010 as captured in the last National Population and Housing Census.

Mr. Agyenim Boateng, whose parent company-HFC Bank- is a pioneer in the provision of  mortgage facility in the country- opined that developers must provide houses that meet the needs of low, medium to high income earners and that, organisations such as SSNIT must embark on more social investment in order to help reduce the country’s housing deficit.

“SSNIT should take a look at its investment. It must do more social investment rather than the profit oriented investments because at the end of the day we must live well and healthy to continue to work so that we can continue to contribute to the SSNIT fund. But if we are looking to only our pension so that when we go on pension we can live well,then, what will happen is that we will retire but with no place to put our head. So I think they should have a second look at their investments properly,” he added.

Stakeholders in the real estate sector believe that it is about time government intervened with tax waivers for developers to build houses that match the pocket of all income earners and that building materials should be subsidised.

The land problems and lack of regulation coupled with lack of access to credit, the experts agreed should also be given the needed attention.

Currently, the biggest problem in the housing sector is affordability as many developers continue to provide houses for the high end of the market, thereby leaving majority of the citizenry in want of a place to lay their head.

At present, most of the housing units on the market are targeted at high-income earners and Ghanaian returnees with hard currency to acquire an accommodation worth more than US$500,000 on the average.

As fewer people among the estimated 27 million Ghanaian population have enough disposal income to spend on high-end properties, the market has become crowded with opportunities now in the upper mid-income bracket, where there is a huge and unsatisfying demand.

According to Dr.Sarfoh, there is the need for all stakeholders to collaborate in finding solutions to the housing problems.

“We can solve the housing problem through collaborations from all industry players. All of us need to work together and if we are able to do this, I believe we can find a local solution to the affordable housing problem in the country,” he said.