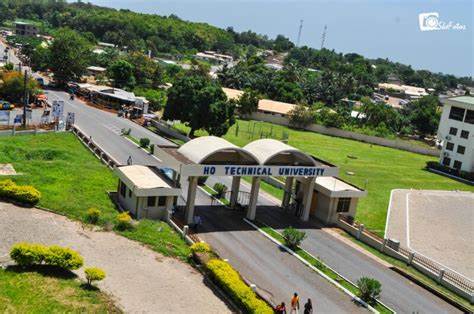 Homepage » Education » Ho Technical to be run as entrepreneurial university

Practical innovations targeted to address technical and vocational needs of Ghana and beyond will soon be the hall mark of the Ho Technical University (HTU), the new Vice-Chancellor, Professor Ben Quarshie Honyenugah, has indicated.

The former Pro Vice-Chancellor of the HTU, whose investiture as the first vice-chancellor of the university was held last week, said since research was the backbone of higher institutions, he would promote quality research and practical innovations to acceptable levels of international demands.

He said his vision was in line with a five-year strategic plan rolled out in 2017 to transform the Ho Technical University into a reputable technical institution that would be run as an ‘entrepreneurial university’ that would provide services both locally and internationally to generate income for it.

“Undoubtedly, we are in a global world where internationalisation of universities is key. Hence, I will expand the existing international collaborations and seek others with more reputable institutions globally in mounting varied, recognised and relevant programmes,” he said.
He pledged to use his national and international networks to assist in programme development and accreditation to make the HTU a global player.

Prof. Honyenugah appealed to staff and faculty to stand with him in unity and shun indiscipline and negative activities that would draw them back on their goals.
“The future of the university looks bright. However, its successes and achievements can be attained and sustained if we unite, support one another and put our shoulders to the wheel to perform the required actions stipulated in the strategic plan,” he stated.

The Minister of State in charge of Tertiary Education, Prof. Kwesi Yankah, said Ghana had reached a stage where innovation and creativity were critical in propelling its industrialisation agenda for accelerated economic transformation.

Congratulating the new vice chancellor, Prof. Yankah tasked the university to remain focused on its application of the Competency-Based Training (CBT) to all teaching staff.
He disclosed that the government, through the Council for Technical and Vocational Education and Training (COTVET), was in the process of providing laboratory equipment to selected technical/vocational institutions across the country, adding that the HTU was among the three selected institutions for the project.

He charged management to ensure that it also developed a code of conduct for staff and students as well as a policy on sexual harassment to guide the interaction between faculty and students.
Vice-Chancellor
Prof. Honyenugah goes into history as the first Vice-Chancellor of the HTU since its conversion from a polytechnic to the status of a university.
He has a rich experience in teaching for two decades at the undergraduate and graduate levels.
He obtained his PhD in Management from the Open University of The Netherlands, Heerlen (July 2015) and Master of Philosophy degree from Maastricht School of Management in The Netherlands (June 2012).
The processes for his appointment were handled by a team of acclaimed scholars, administrators and university managers who had rich knowledge and experience in public service both nationally and internationally.

The Chairman of the Council of the HTU, Prof. Emmanuel Flolu, described the appointment of Prof. Honyenugah as historic and a blessing to the university, since “it is the first time in the life of the institution since it attained a tertiary status that a faculty member has risen to the professorial rank and also as the academic and administrative head.”