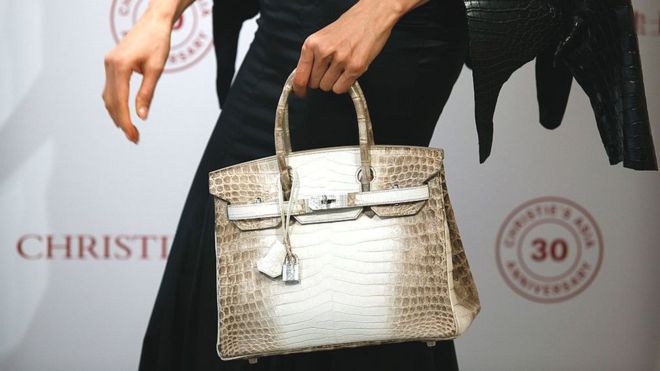 Homepage » Lifestyle » The Handbag That Costs As Much As A House

For that price, you could buy a house in the UK (where the average dwelling costs £223,285, according to the Halifax) and still have plenty left over.

Yet astonishingly last year someone did pay that amount of money for a rare 2014 Himalaya Birkin – a matte white handbag by Hermes.

It was fashioned from Nilo crocodile hide and adorned with 18-carat white gold and diamond-encrusted details.

While £279,000 is a record breaking price tag for this “holy grail” of handbags, it is a drop in the ocean when it comes to the increasingly lucrative market for buying and selling pre-owned luxury “arm furniture”.

High-end bags have come a long way from the days when Princess Grace of Monaco used an Hermes Sac a depeches to hide her growing baby bump from the paparazzi. It was subsequently renamed the Kelly bag after the former Hollywood star.

Expensive handbags are now ubiquitous among celebrities such as reality TV personalities Kim Kardashian West and her mother Kris Jenner.

However, these bags are no frivolous trinkets.

Auction house Christie’s says the global pre-owned luxury handbag market has jumped from being worth £5.1m in 2011 to £26m in 2016.

Heritage Auctions believes that the worldwide secondary auction market for the “ultra high-end bags” is between $75m and $100m “and growing”.

In investment terms, these assets can offer a huge return on your cash.

Investment bank Jefferies reckons that some bags can generate returns of about 30% a year.

Handbags made by Hermes, the French luxury goods house, are the most sought-after.

Rachel Koffsky, a specialist in handbags and accessories at Christie’s, says Hermes handbags “have been crafted in the same way, in the same materials for decades, whereas many other brands have been inconsistent in production over the past 100 years”.

She adds that the three best-known bags – the Kelly, the Birkin, made for the singer and actress Jane Birkin, and the Constance, named after the fifth child of Hermes designer Catherine Chaillet – “have remained virtually unchanged since they were designed”.

However, Jefferies says: “Over the past 10 to 20 years, luxury brands have increasingly been able to raise the prices of their handbags and use more premium materials so in the future the top of the market is likely to become less dominated by Hermès.”

Heritage Auctions says that as well as Hermes, Chanel’s iconic flap bags “are always favourites for the paparazzi to catch on the celebrity arms of the world’s most famous”.

Ms Koffsky adds that, in the 1990s, two designers in particular were responsible for ushering in the “era of the It-bag” – Tom Ford at Gucci and Marc Jacobs at Louis Vuitton.

These, along with the characters in the TV series Sex and the City, “brought collectable handbags into the mainstream”.

It also means that the somewhat intimidating world of auction houses is opening up to a different kind of clientele.

Ms Koffsky says: “Handbags have a very wide appeal and is a category most consumers are more comfortable with when compared to traditional flat or even decorative art.”

Jefferies says that handbags are the “most accessible category” at Christie’s because of the lower cost of the lots, adding that 40% of the 712 buyers in that category were new to the auction house.

Heritage Auctions says that there is no typical buyer. They can range from people who want to add to their existing handbag collection – or those who would like to start one.Ms Koffsky says quite often buyers become sellers and vice versa.

She says: “At the top end of the buyer spectrum, we have collectors who count their handbags among their most valuable assets. On the other end, we have young and savvy shoppers looking for a vintage piece that will stand out from current trends, oftentimes it is significantly less than retail.

“Perhaps it is their first time buying at auction.”

However, while handbags have attracted a new clientele, it isn’t a world open to everyone.

Choosing a second-hand bag may snag a buyer a bargain but these are not accessories within everyone’s grasp.

Flavio Cereda, an analyst at Jefferies, says that Hong Kong has become a hot spot for high-end handbags.

Forbes recently reported that the combined wealth of Hong Kong’s billionaires soared by $60bn to $307bn last year – the biggest rise for a Forbes Asia 50 list.

Christie’s said 46% of its luxury handbag auction sales were in Asia in 2017, followed by the US at 30% while Europe, the Middle East and Africa accounted for 24%.

It is no coincidence that those two rare Himalaya Birkins bags were auctioned in Hong Kong.

These are the type of handbags that make good investments, says Ms Koffsky.

“For a positive return on investment, numbered and limited edition pieces will stand out as they are only created in a very limited run,” she says.

“The less pieces exist on the secondary market, the more that a collector will spend to get a hold of it.”