Homepage » Book Review » Half of a Yellow sun 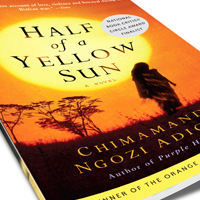 Even though the title refers to the emblem of a country that never was, the words Half of a Yellow Sun remind me of the never-ending dance between the half full and half empty contents of that proverbial glass that is probably not worth its status as the representation of the standard. The title of her Orange Broadband Prize-winning masterpiece aptly describes the mixture of hope and despair that Chimamanda Ngozi Adichie creates in this gripping story.
Half of a Yellow Sun is set in Nigeria during the 1967-1970 Civil War between Nigeria and the newly seceded Biafra. The story alternates between events that take place during the early 1960s—when, like the tell-tale pre-tantrum wobble of a toddler’s jaw, the political turmoil sets the stage for the war—and then during late 1960s, when all the horrors of a civil battle are in full swing. The effect of the war is shown through the dynamic interactions among the lives of five people—Odenigbo, an off-the-wall intellectual, Olanna, his beautiful girlfriend, Ugwu, his 13 year-old house boy, Kainene, Olanna’s sardonic twin and Richard, a British writer and Kainene’s lover.
In the early 1960s, Ugwu is brought in from the village to work as a houseboy for Odenigbo. A Mathematics professor and a political revolutionary, Odenigbo frequently entertains intellectuals to discuss the political turmoil in Nigeria. In his sitting room, we are privy to information about the current state of Nigeria as the author utilizes Odenigbo’s political club as a medium to satirize the government of that time. Adichie’s knack for transporting you to a place and a time you have never experienced, with her beautifully simple and vivid descriptions, is all the more pronounced in this story as we view most scenes through the eyes of a curious and sharp-witted village boy.
Life changes at Odenigbo’s house on Odim street when his girlfriend Olanna moves in. Ugwu forms a strong bond with both of them. Developing an intense adoration for Olanna and coupling that with his loyalty to Odenigbo, he treats their relationship as if it were his. Interspersed with the events at Nsukka are the details surrounding Kainene’s unlikely relationship with the shy and uncertain Richard.
Jumping four years ahead, trouble is brewing between the Hausa and the Igbo people and hundreds die in the bloody massacres. Driven by righteous anger, the Igbo people decide to secede from Nigeria and form a new republic, called Biafra.  As a result of this secession, the already deep seated tensions degenerate into a war. The conflict forces Olanna, Odenigbo, their daughter Baby and Ugwu to flee Nsukka, the university town and the major intellectual hub of the new nation. They finally end up in the refugee town of Umuahia, where they suffer as a result of food shortages, unceasing air raids and a paranoid atmosphere. There are also allusions to a conflict between Olanna and Kainene, Richard and Kainene and Olanna and Odenigbo.
The story briefly returns to the early sixties to fill in the gaps, and for a moment, we are back to times before the war—the author giving us a brief respite and the rare chance to go back in time where problems, now insignificant in light of present horrors, seemed insurmountable. We are back in the late sixties, the middle of the war, where Odenigbo, Olanna, Ugwu, Kainene and Richard struggle to decide whether the sun is midway through a journey upwards or halfway down on its setting path.
Maintaining the historical accuracy of all political events, Chimamanda Adichie refers to her brave discourse of the war as ‘emotional truth.’ Never was a piece of literature more aptly described. Adichie is a master of description, telling of the war with such sharp imagery that one wonders whether, though impossible, she were not a part of it herself. With a fluid, almost offhand narrative technique, the author baits you from the first page and reels you in as she introduces you to her characters, so fully formed, so dynamic, so completely realized that the reading experience is akin to becoming intimately involved with five new people all at once.
Half of a Yellow Sun is a genius creation, eagerly endorsed by the legendary Chinua Achebe who describes Adichie as a writer “endowed with the gift of story tellers [who]…came almost fully made.”