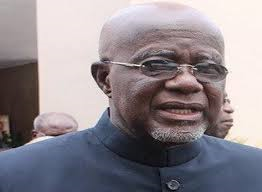 President Nana Akufo-Addo has sworn in former Minister of Water, Works and Housing under the erstwhile Kufuor administration, Hackman Owusu-Agyeman, as Board Chairman of the Ghana Cocoa Board.

Other members who were appointed to serve on the Board including Kwame Sarpong, Carlos Ahenkorah, Nana Johnson Mensah, Nana Dokua among others, were also sworn in today [Tuesday].

Mr. Owusu-Agyemang takes over from the immediate-past Board Chairman of COCOBOD, Daniel Ohene Agyekum, who served as Ashanti Regional Minister and Ghana’s Ambassador to the United States of America under the National Democratic Congress (NDC) administration.

The swearing ceremony comes weeks after a probe into the activities of the former Chief Executive Officer of COCOBOD, Dr. Stephen Frimpong over corruption allegations.

Dr. Opuni was on January 12, 2017, asked to leave office shortly after the new NPP government was inaugurated. As a former CEO of the Food and Drugs Authority (FDA), Dr. Stephen K. Opuni was appointed by former President John Mahama on November 30, 2013, to head the COCOBOD.

He replaced Anthony Fofie, who headed COCOBOD from 2009. Swearing in the new appointees, President Nana Addo indicated that, cocoa has been Ghana’s “flagship commodity on the international scale and a source of good livelihood for several generations of Ghanaian farmers”, but was quick to add that interest in cocoa farming has “waned in recent years” due to several factors including illegal mining.

The President however declared government’s commitment to reviving the cocoa industry by increasing production.

“The government and I have made a commitment to raising production levels of cocoa to at least 1 million tonnes, and to process more than 50 percent of our cocoa beans. We have committed ourselves to finding new markets and improving our cocoa value chain. We are determined to make it a lucrative industry again. We are going to need your cooperation and full involvement