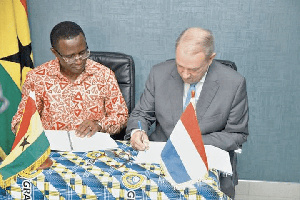 The Ghana Revenue Authority (GRA) has signed a memorandum of understanding (MoU) with the Tax and Customs Administration Office of The Netherlands to build the capacity of personnel of the authority.

Under the agreement, which spans a period of 18 months, officials of the Domestic Tax Revenue Division of the GRA will receive training in risk-based audits, while staff at the Transfer Pricing Unit at the Large Taxpayer Office will have their capacities built to sharpen their skills and enable them to conduct transfer pricing audits more effectively.

The training programme is scheduled to start next month and end in August next year.

Transfer pricing is the price that is paid for goods or services transferred between two companies of the same multinational group but situated in different countries.

Companies with subsidiaries in other jurisdictions take advantage of different tax regimes in different countries by booking more profits for goods and services produced in countries with lower tax rates.

In some cases, the companies lower their expenditure on related-party transactions to avoid tariffs on goods and services exchanged internationally.

Before the signing of signatures, the acting Commissioner-General of the GRA, Mr Ammishaddai Owusu-Amoah, lauded the government of The Netherlands for supporting the authority to build its capacity in the area of transfer pricing, explaining that the GRA faced challenges with transfer pricing issues when auditing large and complex businesses.

“The authority will tap into the knowledge and experience of officials from The Netherlands to build the capacity of staff at the Audit Department to enable them to appreciate auditing techniques directed at helping them to reduce abuse and ultimately rake in the needed revenue,” he said.

He said building the capacity of the GRA in transfer pricing was important, since it was a tax avoidance mechanism that multinational companies sometimes exploited to reduce their tax obligations, while denying the state revenue due it.

Mr Owusu-Amoah urged officials of the GRA selected to take part in the training programme to take advantage of the opportunity presented them to learn and become well equipped to handle complex audits easily and effectively.

The Deputy GRA Commissioner in charge of Policy and Programmes at the Domestic Tax Revenue Division, Mr Nathan Nettey, said officials from the Transfer Pricing Unit who would take part in the training programme would visit some multinational companies that had been profiled as audit risk.

The Netherlands Ambassador to Ghana, Mr Ron Strikker, who signed the agreement on behalf of his government, explained that transfer pricing focused on transactions between a mother company and a daughter company, with the risk of not accurately pricing the services of one company under the multinational group to the other company, which ought to be avoided.

He said detecting transfer pricing techniques was important for all countries, including Ghana and The Netherlands, since all companies ought to pay their fair share of taxes.

The MoU, he said, was one of the many cooperation agreements that The Netherlands had with Ghana on taxation, adding: “We have cooperated on compliance and risk management between the two countries over the years.”