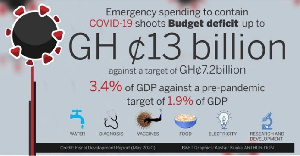 Unbudgeted expenditure, largely occasioned by emergency spending to contain the spread of the coronavirus pandemic that was first recorded on March 12 in the country, has astronomically shot up the budget deficit by nearly double in the first quarter of the year.

This comes as no big surprise at all, as the government indicated after the pandemic struck the country it would look to both internal and external sources of financing to take care of its emergency operations, as the virus subsequently shut down economic activities which would have otherwise brought in revenue.

Some of the emergency expenditure government had to make included procuring Personal Protective Equipment (PPE) for frontline workers; providing food and other supplies to the vulnerable in the lockdown period, and providing free water and subsidised electricity for the people for three months among other stimulus aid given to industry and SMEs.

According to the Bank of Ghana report, domestic financing (net) for the period under review was GH¢9.4billion, representing 2.4 percent of GDP) against the target of GH¢2.8billion (0.7 percent of GDP).

There was also GH¢3.9billion borrowed from the banking sector and GH¢3.1billion from the non-bank sector. GH¢828.6million of the non-banking sector borrowing came from non-residents. The report acknowledges that the expanding deficit, and the primary deficit, will exert pressure on the public debt stock – and alongside lower growth projections for 2020, pose debt sustainability risks over the medium-term.

Already, the IMF and World Bank have expressed concern about the country’s rising debt situation, due to which they caution the economy is at risk of debt distress. The public debt stock as of March stood at 59.3 percent of GDP. It is however reasonable to expect further increases due to increased pandemic-induced spending, exacerbated by shortfalls in revenue.

Revenue generation has also been hit strongly by the pandemic, especially with regard to oil proceeds due to falling prices. The same Fiscal Development Report shows that out of the GH¢1.9billion projected to be reaped from the oil sector in the first quarter, only GH¢331million was realized – indicating a more than 82 percent shortfall from the target.

This, among other declining revenues from international trade, corporate taxes and other non-tax revenues, resulted in a GH¢3.6billion shortfall of total revenue and grants, as GH¢10.3billion (2.6 percent of GDP) was realised from a target of GH¢13.9billion (3.6 percent of GDP) for the first quarter.

Finance Minister Ken Ofori-Atta said in March government would secure a World Bank loan of GH¢1.7billion and an IMF Rapid Credit Facility of GH¢3.1billion. The former has subsequently given government a facility of US$500million, whereas the latter has given US$1billion to take care of budgetary and emergency needs.

All these funds came in April, essentially meaning more debt will be piled onto the mounting debt stock. Government has projected an overall budget deficit to hit, at least, 7.8 percent of GDP from a pre-corona target of 4.7 percent.