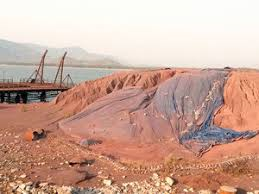 Government has ordered the shutdown of operations of the Ghana Manganese Company Limited.

This is due to alleged nonpayment of taxes and price manipulation between the periods of 2010 to 2017.

The company has been under investigation since February 2019 after preliminary checks of its finances revealed several infractions.

Making this known at a press conference on Monday, the Minister of Lands and Natural Resources, Kwaku Asomah Cheremeh revealed that plans have been put in place to retrieve the monies.

“GMCL has not shown strong commitment to value addition in particular. There are also defaults by the company in the payment of annual minerals rights fees in excess of 4 million dollars. These and several infractions give me no option as the sector Minister than to close down the operations of GMCL.”

“The company is therefore instructed to stop all mining exploration and export of minerals effective 6th August 2019. The Ministry together with the Minerals Commission and other relevant stakeholders will immediately commence discussions with Ghana Manganese to resolve this and other outstanding issues in the course of the shutdown.”

The Minister had earlier directed the management of the company to halt its mining operations due to inconclusive data on the company’s operation and revenue.

The directive, according to a letter signed by the minister and dated January 31 was to enable the state undertake a thorough and uninterrupted technical and financial audit of the mining entity.

According to the letter, preliminary assessments of the company raised some concerns; thus the need for a detailed audit to ascertain the facts.

“A preliminary assessment of your report document and information available to the government on operations has left us with no option than to ask you to immediately cease operations in your mining area.”

“The cessation of your operations will among other things, ensure that the technical and financial audit are undertaken without any challenges. You are, therefore, requested to stop mining operations by February 1, 2019,” the letter stated.