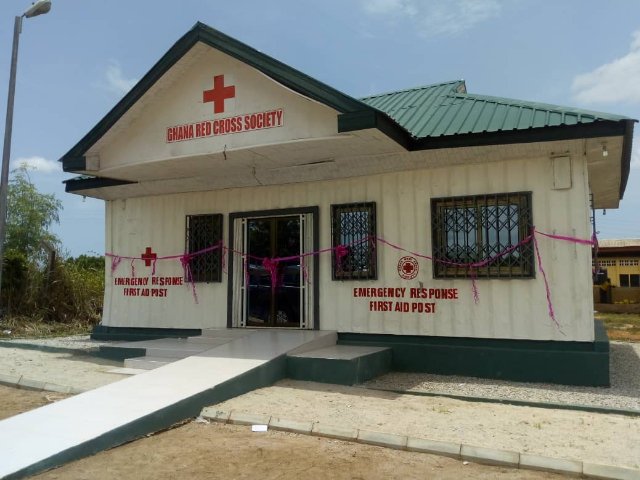 The National Road Safety Commission (NRSC) has begun the process of establishing 100 Emergency Response and First Aid Posts at strategic locations along the major highways of the country.

Eight of such posts are already completed and fully equipped with medical items, VHF portable two-way radio device, safety boots and bicycles. This is part of measures to minimise deaths while sustaining life of victims of road traffic crashes through emergency response measures.

The Minister for Transport, Kwaku Ofori Asiamah, inaugurated the facilities Friday, at Gomoa Ankamu near Apam Junction in the Central Region.

According to him, the establishment of the Emergency Response and First Aid Posts was triggered by the lack of capacities of the Ghana Red Cross Society and the National Ambulance Service to deal with emergency response issues within the context of providing medical care for road traffic crash victims.

“The Road Safety Commission, therefore, undertook to strengthen the national capacities for post-crash care to victims of road traffic crashes through advocacy and resource mobilization with the view to equip the National Ambulance Services with dedicated ambulances for victims of road traffic crashes including training of Emergency Medical Technicians (ETMs) and install fully equipped First Aid Posts at strategic locations along the national road network in addition to training of respondents,” he explained.

He said the facilities will be managed on a 24-hour basis by the Ghana Red Cross Society with support from the National Disaster Management Organization (NADMO), St. Johns Ambulance, Ghana National Fire Service and the Ghana Police Service.

They feed into major hospitals on the major corridors of Accra-Kumasi, Accra-Aflao and Accra-Takoradi highways were funded by the World Bank under the Transport Sector Project (TSP) and are to respond to the needs of post-crash victims within the framework of the National Road Safety Strategy III (2011-2020).

The Executive Director of the NRSC, May Obiri Yeboah, on her part said the manhandling of crash victims has contributed to a large extent, the number of people who die through road traffic crashes, hence, the establishment of the facilities as part of their contributions to emergency services.

She noted the eight facilities are being piloted for them to see how the system will work before they are scaled up to cover the entire nation.

Government is expected to release additional GH₵1billion over the next three years, to help deal with the backlog of road safety infrastructure needs, deputy Roads and Highways Minister, Kwabena Owusu-Aduomi, has announced.

These include road signs, line markings and barriers among others, that were inherited when the current regime took over power in January 2017. Mr. Owusu-Aduomi is hopeful that the number of deaths recorded through road traffic crashes will be reduced with the coming on stream such facilities.

“The Ministry of Roads and Highways working through its agencies – thus the Ghana Highways Authority, Department of Feeder Roads, Department of Urban Roads, continuously strive to improve upon the road network to increase accessibility, convenience, comfort and provide essential road safety infrastructure,” he indicated.

“Ministry is however disturbed that the more the roads are improved, the more dangerous they become to lives and properties because of lack of discipline on the part of some drivers. These include untimely overtaking, over speeding, parking in the carriage way without warning triangles or signs, overloading of vehicles and not respecting traffic and warning signs,” he added.