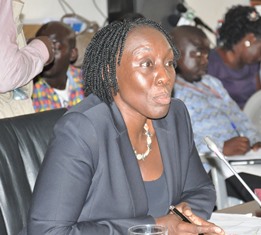 The government has compulsorily acquired lands on which the gas processing plant at Atuabo in the Western Region is situated.

By the acquisition, the lands in dispute at Atuabo, the metering station of the gas project and the right of way for gas pipelines to Aboadze have all become the property of the state.

The Minister of Lands and Forestry signed an Executive instruments (EIs) to ensure that lands in seven cites where the gas project is situated falls firmly in the hands of government.

Consequently, a Gazette notification, dated June 13, 2014, has given notification of the compulsory acquisition.

Article 20 of the 1992 Constitution mandates the government to compulsorily acquire lands for the benefit of the public.

In an interview with the Daily Graphic yesterday, the Attorney-General and Minister of Justice, Mrs Marietta Brew Appiah-Opong, disclosed that owners of the lands in the affected areas would be duly compensated.

The Omanhene of the Eastern Nzema Traditional Area, Awulae Amihere Kpanyinli III, took the Ghana National Gas Company (Ghana Gas) and four others to court on April 15, 2014 over the takeover of the affected lands by Ghana Gas without any payment.

Awulae Kpanyinli had argued in his affidavit in support of the suit that none of the defendants had lawfully acquired the land from the traditional authorities.

The other defendants in the substantive case are SINOPEC, the Chinese construction firm working on the Atuabo Gas Project, Quantum Terminals Limited, the Ghana Oil Company (GOIL) and Ernest Nunoo, owner of the Ernest Seafront Hotel.

As a result of the government’s compulsory acquisition, which is backed by the 1992 Constitution, lawyers for Ghana Gas are expected to either amend the defence to include the fact of the acquisition or formally announce the latest development to the court.

The amendment and or formal announcement to the court is due to the fact that the land had not been completely acquired as of the time of the acquisition.

Referring to the landowners, Mrs Appiah-Opong said, “All they are entitled to now is compensation. We will pay them.”

She indicated that by the provisions of the 1992 Constitution of Ghana, the government was obligated to pay compensation when it compulsorily acquired land for public purposes.

“The fact that we will pay the compensation is not in doubt. The government will live up to its obligation,” she said.

Asked what was being done as of now, the Attorney-General disclosed that the Land Valuation Board was currently valuing the affected lands.

The Sekondi High Court, on June 19, 2014, overturned its earlier ruling that restrained Ghana Gas and four others from carrying on any activity on the land on which the company operated until Ghana Gas regularised its occupation with the Eastern Nzema Traditional Council.

That was after the court had upheld an application for a variation of its earlier decision filed by Ghana Gas.

The court, presided over by Mr Justice Kofi Akrowia, had, on Monday, June 9, 2014, restrained the defendants from carrying on work at the project site for a period of 14 days, within which Ghana Gas was to contact the chiefs and the people of the traditional area to regularise its stay on the land.

The court imposed the injunction following an application filed by Awulae Kpanyinli.

It had, in its earlier ruling, said should the defendants fail to take advantage of that leeway offered by the court to regularise their occupation of the land, the injunction would then become permanent.

Arguing the case for Ghana Gas at the Takoradi High Court on June 19, 2014, its counsel, Mr Enoch Larbi-Aboagye, said prior to the commencement of the construction of the gas processing plant, the company had, together with officials of the Ministry of Energy and Petroleum, approached the plaintiff and indicated the intention of the Government of Ghana, through the company, to site the plant, which formed part of the Western Corridor Gas Infrastructure Development Project, at Atuabo.

According to him, it would cost Ghana Gas US$1,217,505 in labour for each day and US$17,045,070 for the 14 days that the expatriate workers would remain idle as a result of the restraining order and the order would result in the delay of the supply of gas to the Volta River Authority for the generation of thermal power.

The court, consequently, granted counsel’s prayer and vacated its injunction on Ghana Gas and the other defendants.