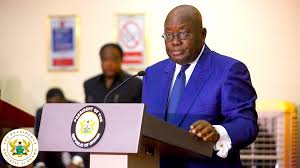 Mr. Kwasi Amoako-Atta, the Minister of Roads and Highways announced on Monday in Sunyani.

He was responding to a concern raised about the road infrastructure network in the Region on behalf of President Nana Akufo Addo at the Brong-Ahafo Regional House of Chiefs.

The meeting was the start of the President’s two-day working tour of the Bono Region.

Nana Bofo Bene IV, the Paramount Chief of Dwenem-Awasu Traditional Area in the Jaman South Municipality and the Vice President of the House had earlier in a welcoming address expressed concern that 42 percent out of 572.4 kilometres of road network in the Region were not motorable.

Mr. Amoako-Atta said on the assumption of office in January 2017 by President Akufo Addo, only 23 percent of 78,000 road networks in the country were tarred, while the remaining 77 percent was untarred.

But, he added, since then, the President had ensured all the 16 regions were benefiting from road projects.

Mr. Amoako-Atta assured that the government would give the Bono Region its fair share of the national cake.