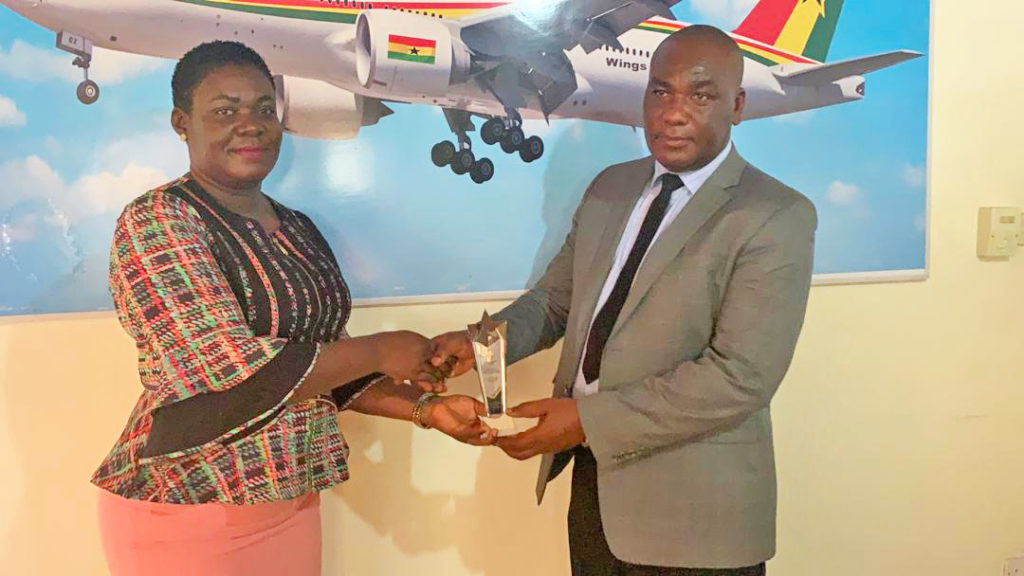 The Global Stewardship Network the organizers of Global Stewardship Awards in the United Kingdom, South Africa and Ghana on Monday 1st June 2020, presented The Most Inspiring Award in Aviation Award to the Executive Chairman and CEO of Ghanaian airline Goldstar Air, Mr. Eric Bannerman at the Head Office of the Airline.

The Citation further reads that “We carry in our hearts the uniqueness of your service and may the almighty God strengthen, increase you in wisdom and build you in stature and also thank him for his great contribution, we appreciate you very much.

The company recently received the Most Promising Airline of the Year Award at the Quality Excellence Awards at the Golden Tulip Hotel in Accra. The decision for awarding the airline was arrived at having carefully evaluated the business performance, the strong positive relationship between the company and its various stakeholders through mutual support and respect, and the company’s conduct and achievements during the year under review.

According to the Executive Chairman, Mr. Eric Bannerman the airline’s great work has increasingly been recognized which marks another milestone for the Goldstar Air and is a testament to the airline’s strategic initiative to leverage its local and global exposure and presence for a smooth take off.

Goldstar Air aims to improve the Ghanaian economy by facilitating international business and also enhance the lives of Ghanaians through affordable and available international travel while providing job opportunities and aviation related training to Ghanaians especially the youth.

The airline has pledged to offer seed money of Five Thousand Ghana cedis (Ghc 5,000) for travel agencies that have registered with Ghana Tourism Authority for over a year in support of the corona virus alleviation effort.

Bannerman further explains that the agencies must also be willing to apply for Goldstar Air’s Local Billing System and the same amount or more to serve its tickets.

Goldstar Air is a wholly owned Ghanaian Airline which plans to utilize the country’s status as the “Gateway to West Africa.” The airline will initially be flying to twelve destinations worldwide from Accra, namely London, Dubai, Guangzhou, Washington Baltimore, Lagos, Abidjan, Monrovia, Freetown, Banjul, Conakry, Providence and Dakar. Subsequently it also plans to serve Atlanta-Georgia, Chicago-Illinois, Columbus-Ohio and Houston-Texas. Goldstar Air will be flying one of the youngest fleets in the sky, featuring the world’s most technologically advanced and environmentally friendly aircrafts and comprising a fleet of more than 100 modern aircrafts to more than 90 key business and leisure destination across Europe, the Middle East, Africa, Asia Pacific, Caribbean and North America.