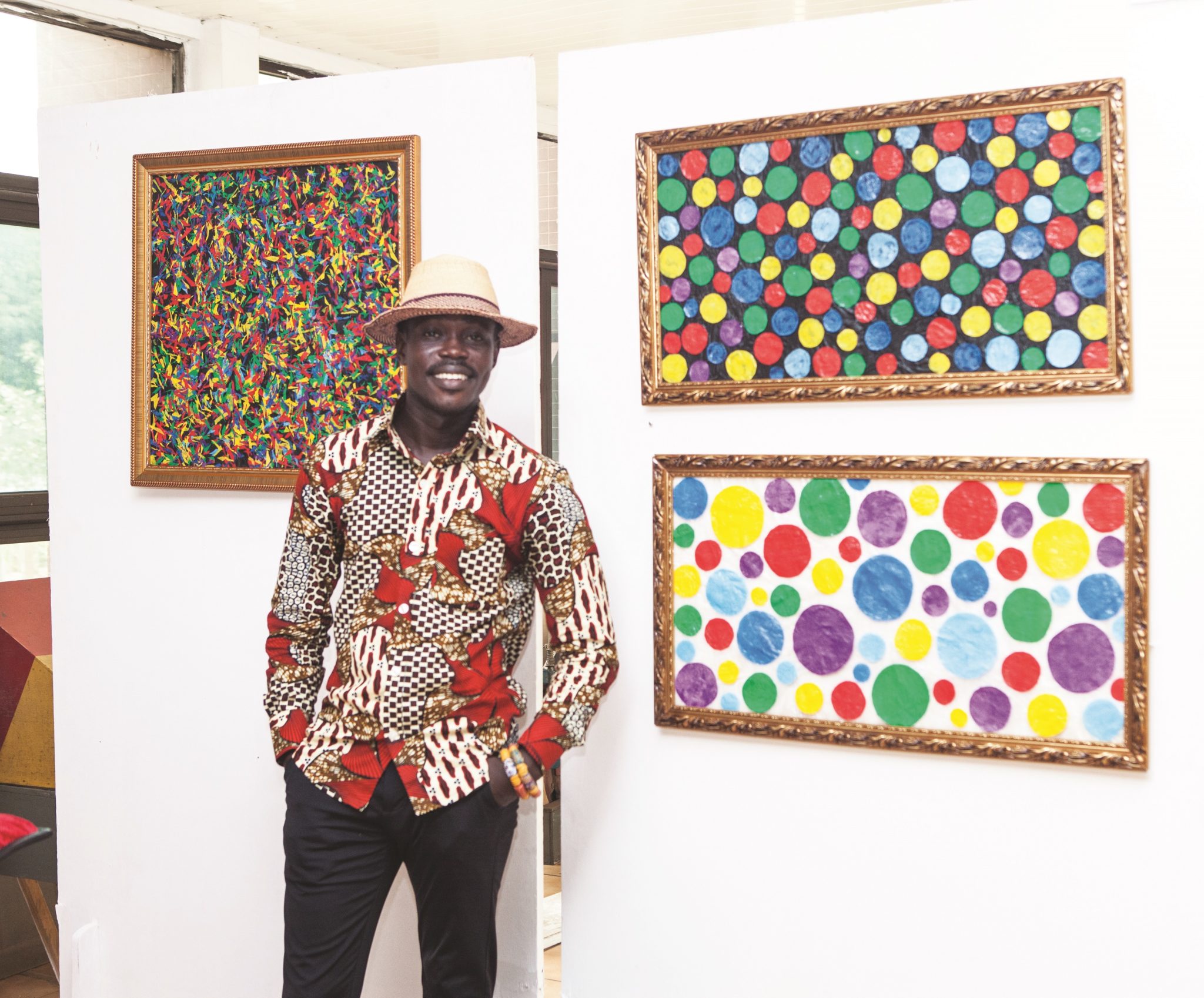 Makafui Awuku has slept on a bench, hunted in the bush, worked at a church and sifted through mountains of plastic waste. He is the man turning trash into cash in Ghana.

Thirtyfive-year-old Makafui Awuku has been through enough pain and penury in life to see beauty in the little things. He is the man who can turn plastic scrap to nifty objects of desire.

His is a life filled with odd, interesting assignments.

It is easy to see why Awuku is not particularly fond of his early years. The social entrepreneur and founder of Mckingtorch Creatives did not have a privileged life.

Born in Keta, Sogakope, in the Volta Region of Ghana, his father, who was a driver, passed away when he was aged 12 leaving Awuku, his sister and mother to fend for themselves. Surviving on his mother’s income as a nurse was not enough for Makafui to achieve his dream of becoming a doctor. Instead, he had to depend on his wits for survival.

He would hunt with a catapult in the bush and even started his own poultry farm to generate extra income. Then in 2005, life became grimmer.

His mother passed away from a stroke and Awuku found himself stranded with no help.

Armed with just $1,000 from his mother’s pension contribution, he moved to Ghana’s capital city, Accra, in search of greener pastures.

That same year, he got admission to study marketing at the Institute of Professional Services but the money he made was not enough to pay tuition fees.

“I have struggled most of my way through life. I have slept on a bench in Accra and I have also slept at a 24-hour internet café. I didn’t have anywhere to sleep, so I decided to just spend the night behind the computer there. While in school, I had to find part-time work to pay my fees and pay my medical bills as I had asthma,” says Awuku.

He would do assignments for his colleagues and charge them for it, and also pick up odd jobs such as being a part-time soccer teacher for an international school in Accra. But he eventually had to drop out of school because he couldn’t afford it.

“I eventually met one of my mentors and supporters, Reverend Richard C. Whitcomb, a senior overseer of the Agape House New Testament Church in East Legon. He gave me a job at the church, then he helped pay my rent and then when I had to go back after I deferred my final year, he helped pay my tuition fees too.”

Awuku published his first book in 2015, The Tertiary Years, to address inefficiencies in the education system in Ghana and help young students build leadership skills.

That was followed by his social project called Student Initiative Ghana, a platform for the personal development and training of young people.

“I have visited over 15 schools and trained over 80,000 people over the last 15 years in the areas of brain-training and memory enhancement and helped young people with learning difficulties.”

He subsequently gained admission to the Young African Leaders Initiative (YALI) program created by former American President Barack Obama in his early years at the White House to develop the leadership of young people in Africa creating value in their communities.

“I spent five weeks in Nigeria at the Administrative Staff College in Badagry. I returned to Ghana to do an internship program. I worked with the One Ghana Movement and one of the programs they were doing was on sanitation. The team was going to be buying 1,000 bins and installing it in various places in Accra in partnership with the Accra Metropolitan Assembly,” says Awuku.

This is when he found his Eureka moment.

“While I was doing the internship, I realized there was a lot of waste generated during board meetings. I decided I wanted to do something about this. I looked through the 17 Sustainable Development Goals and I looked at the plastic waste problem. I said to myself, ‘I took a course on waste management at university and I am a fan of clean environment, so let me do something with sustainable communities and cities which the plastic waste falls under’,” avers Awuku.

A 2002 report by the African Development Bank said that Ghana generated about 3.6 million tonnes of solid waste per year made up predominantly of food, plastic and wood. Awuku decided to join the fight to clean up Accra’s streets. He started Mckingtorch Creatives in January 2018 to turn plastic waste into art.

“So I started collecting bottles from the office and decided to try designing a Christmas tree from plastic waste. I got a welder to install a frame for me that looked like a frame for a tree and I decided to buy ropes. I would drill holes under the bottles and on top of the bottles and pass the ropes through them and install them on the tree. A day before Christmas, I had finished the tree. I bought lights and put them up and there were actually 396 plastic bottles on that tree,” says Awuku.

He installed his new creation in a major street in Madina, a suburb in Accra.

“I realized that it was changing people’s attitudes, they were shocked that plastic waste and bottles could be used in this manner. So I decided that I could take things a lot further and look at modeling some solutions I could develop using plastic waste,” says Awuku.

Some of his creations include flower pots, bins, wall-hangings and even sandals.

He also teamed up with one of the biggest manufacturers of bottled water in Ghana to create a fence with over 10,000 bottles for World Environment Day.

Awuku is determined to tell the youth that there can be workable solutions for waste and that they can be a pertinent part of building a planet free of plastic.