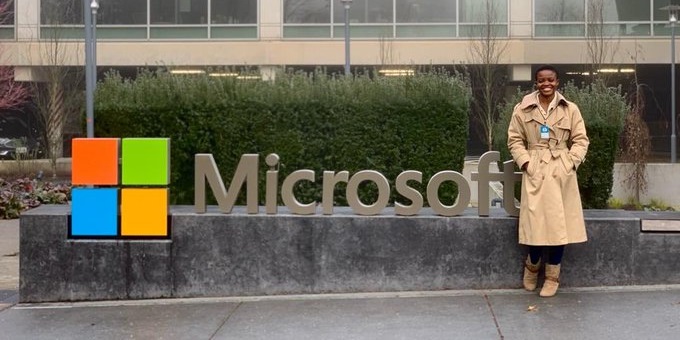 Barley is the co-founder and CEO of Developers in Vogue, an organization helping women embrace the tech industry.

Her organization which she would still continue to manage has trained and equipped thousands of women in Africa with digital skills.

Barley as a young STEM enthusiast self learned her way through coding.

Barley said she was “optimistic about the opportunity to make bigger impact at Microsoft, while taking” her own organisation, Developers in Vogue “to the next level.”

She adds that “I’m glad to part of Microsoft, a company that’s leading technological advancement globally.

I’m even more proud to be associated with a company that loves and supports the work we do at Developers in Vogue. This is literally ‘Come as you are, do what you love’.”

On a continent that is dominated by male tech-entrepreneurs, Ivy Barley is one of the young female Africans changing the narrative.

Ivy Barley holds an MPhil. in Mathematical Statistics and a Bachelor’s Degree in Actuarial Science.

She was listed as one of the Top 50 Most Influential Young Ghanaian in 2017.

For her work she has been featured in Women in Tech book by the German Ministry of Economic Cooperation and Development.

The Ghanaian has also been featured in the Founding Women book by Africa Technology Business Network.